He who paints tombstones without hands 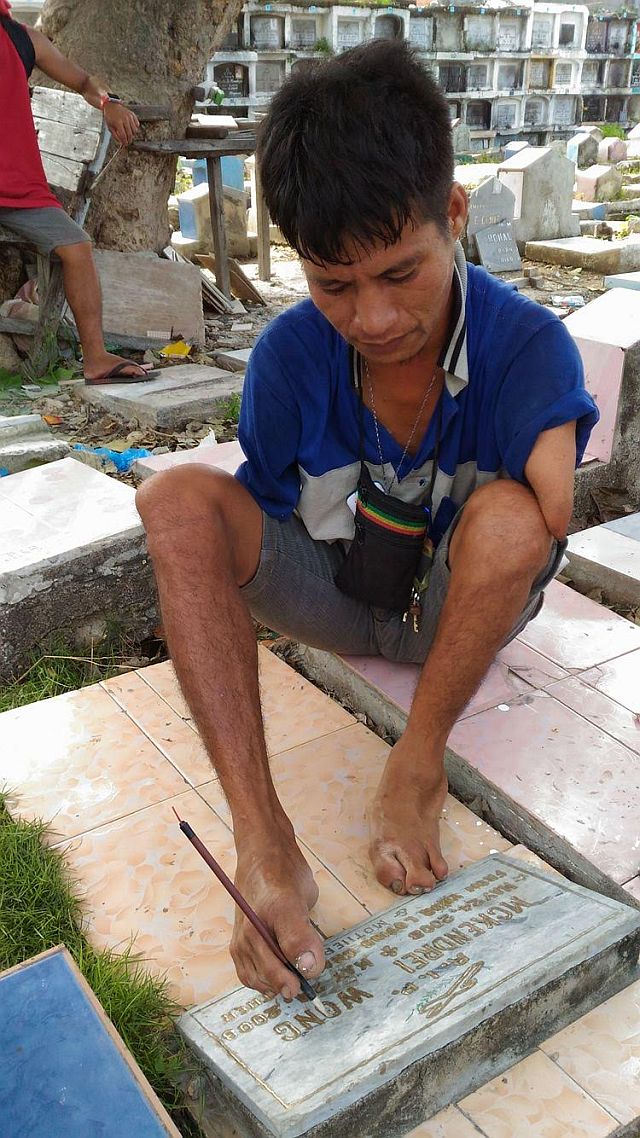 He was born without two hands, but the disability did not stop him from earning a living among the dead.

Meet Vicente Dahunan, who uses his feet to clean and paint tombstones at the public cemetery in Mandaue City where he grew up.

The cemetery is both home and workplace for Dahunan.

He gets paid by cleaning the tombs, uprooting the grass and painting the markings on the tombstones with the use of his feet. Dahunan usually earns P200 a day during lean months and close to P1,000 per day during the weeks leading to All Saints’ Day and All Souls’ Day.

Dahunan, 30, has been working since he was 10 years old, doing all kinds of odd jobs in and around the Mandaue public cemetery to help his parents, who could barely feed their 16 children.

Yes, Dahunan has 15 other siblings. His father was a carpenter while his mother was a leader of a group of three females who offered nine-day novena for the dead. His father died in 2012, and his mother followed a year after.

Dahunan, born without both arms, never strayed away from the cemetery, living in the same place where he grew up. His siblings, however, all left one after another.

He does not know where most of his siblings now reside since they are much older than him. Dahunan is also not sure if he was the 13th or the 14th child born to his parents.

Dahunan taught himself to paint the tombstones by observing other cemetery workers do it. But it took some time before he mastered holding the paintbrush between his toes. Eventually, he became proficient.

“I have no choice. I need to work because if not, I will die of hunger. I have no one to take care of me, so I cannot afford to be lazy,” he says in Cebuano.

Dahunan does not only paint tombstones that are laid on the ground but also those tombs piled on top of another, known as “apartments.”

If he has to work in these “apartments,” he asks other cemetery workers to tie a rope around his upper torso, his paint brush firmly tucked within, before he climbs up the ladder.

Most workers in the cemetery admire Dahunan’s perseverance and diligence and regard him as a source of inspiration.

Jed Carasena, one of the tombstone painters, says Dahunan never complained when he had to climb up a ladder to get to the higher tombs.

“He has no hands, but I have never heard him complain. That’s why we admire him,” he says in Cebuano.

For this year’s All Saints’ Day and All Souls’ Day commemoration on Nov. 1 and 2, Dahunan’s “territory” is the Children’s Grave inside the Mandaue Cemetery, where children aged three and below are buried.

Their tombs are mostly colored pink for girls and blue for boys. Their tombstones are shaped like houses, where their loved ones lay flowers, candles and food.

For the past week, Dahunan has repainted over 50 tombstones in the Children’s Grave.

He sat with a paint brush between his toes and used white, black, or gold latex to repaint the letters.

Dahunan says his disability does not stop him from working hard, and able-bodied individuals should do the same.
But poverty, he says, discouraged him from finding a life partner.

Dahunan, who lives in a shanty attached to the wall of the cemetery, says he does not want to have children who will end up poor like him.

Dahunan says being alone, or having no arms, does not bother him since he finds comfort in working hard even among the dead.

“It is important that you should move no matter what your status in life and your physical disabilities. God helps those who help themselves,” he adds./Contributor Carine Asutilla-Lapid