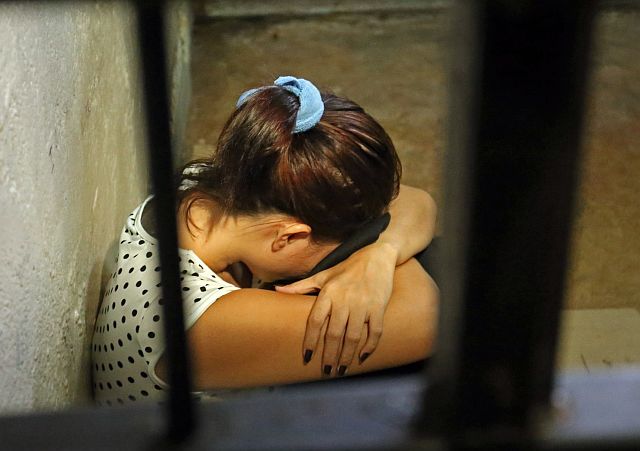 Sharon Abella, a suspected drug dealer described by police as a high value target in the government’s war on drugs, hides her face from the camera. She was arrested last Tuesday along with PO1 Gem Querubin (CDN PHOTO/LITO TECSON).

A Cebu City policeman caught in possession of illegal drugs early this week is headed for more trouble as the chief of the Philippine National Police (PNP), Director General Ronald “Bato” dela Rosa, ordered PNP officials in the region to hasten their ongoing investigation on the cop and dismiss him immediately should his involvement in illegal drugs be proven.

According to Police Regional Office (PRO) director Chief Supt. Noli Taliño, administrative charges were filed against PO1 Gem Querubin who was found, Tuesday night, in the house of a woman, considered by police to be a “high-value target” in its war on drugs.

Querubin also has to explain why he abandoned his beat patrol that night when he was supposed to be on duty.

“Why was he not on his post? He ought to be on his assigned area, but he was not there,” Senior Supt. Joel Doria, director of the Cebu City Police Office (CCPO), said of PO1 Gem Querubin, a beat patrol policeman assigned at CCPO’s Mambaling Police Station, who was arrested in Barangay Sambag 2, Cebu City.

The 33 year old Querubin, along with his alleged girlfriend, Sharon Abella, 32, and a certain Chas Chavit, were arrested by anti-narcotics policemen during a buy bust operation at past 11 p.m. Tuesday.

Abella, considered a “high value target” in the police drug war, was the target of the operation; but policemen were surprised to see PO1 Querubin inside Abella’s house as they were about to take her in.

Police are still validating reports that Querubin and Abella have a romantic relationship.

“Based on the information we got, the two suspects knew each other for quite some time. But now, Abella said it was her first time to meet PO1 Querubin last Tuesday,” the CCPO director said.

Just minutes after the buy bust operation against Abella, police found a small sachet of shabu (methamphetamine) with Querubin while another pack of shabu was confiscated from Chavit.

Police recovered inside Abella’s house a total of 50.32 grams of shabu valued at P593,776 based on Dangerous Drugs Board (DDB) estimates.

Querubin, who has been a policeman for six years, was subjected to a drug test to determine whether or not he was using illegal drugs.

The results have yet to be released by the Philippine National Police (PNP).

Earlier, Querubin tested negative of illegal drugs in a surprise drug test conducted by the CCPO headquarters on policemen working in the city.

“Querubin had to undergo another drug test since a pack of shabu was taken from him during the operation. We would just like to know if he’s using illegal drugs,” Doria said.

PO1 Querubin and Chavit face charges for violation of Republic Act 9165 or the Comprehensive Dangerous Drugs Act of 2002, for possession of shabu, while Abella was cited for possession and selling of illegal drugs.

Taliño, for his part, vowed that Querubin would be held accountable for his actions along with other cops in the region linked to illegal drugs.