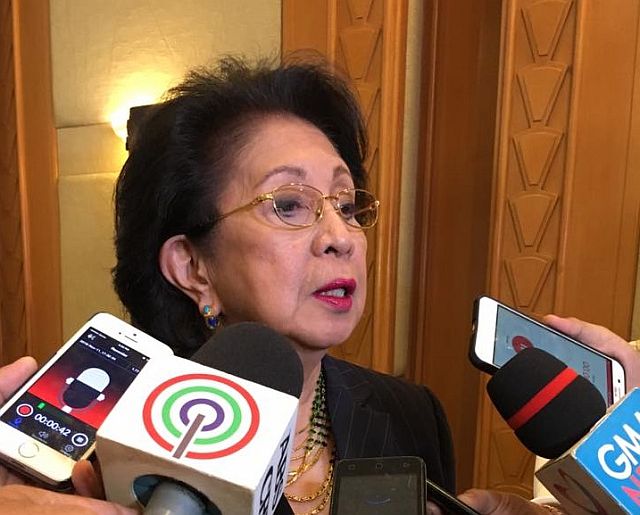 Ombudsman Conchita Carpio-Morales has constituted a panel to investigate the death of Albuera, Leyte Mayor Rolando Espinosa Sr., on the heels of a Senate investigation that called the killing a premeditated act of the police.

“We, in fact, constituted a panel of investigators. They are now conducting investigation, and let’s see what we can arrive at,” she told reporters while in Cebu yesterday.

A panel of investigators from the Ombudsman Military and Other Law Enforcement Office (Moleo) was designated to conduct the probe.

Morales’ pronouncement came just hours after President Rodrigo Duterte declared that he believed in the police’s version of a shootout, not a rubout, in the killing of Espinosa.

“Let me state my case as the chief executive of the executive branch: I believe in the version of the police,” Mr. Duterte said in a news briefing he gave shortly after arriving from his trips to Thailand and Malaysia yesterday morning.

(Let him be. We have not been reading or listening to the news. We are busy attending to the mayor’s wake.)

Espinosa’s wake is now being held at the mayor’s residence in Albuera, Leyte. His remains were brought home a day after he died in a supposed “shootout” with policemen who, armed with a search warrant, raided his cell in the Leyte sub-provincial jail in Baybay City at dawn of Nov. 5.

Morales said she ordered an investigation because of the gravity of the allegations leveled against policemen from the Criminal Investigation and Detection Group (CIDG) involved in the incident.

“Yes, it has been created, given the number of persons involved and the possibility that one or two or three crimes were committed. Please emphasize the word ‘possibility,’” stressed Morales.

She explained that their investigation is an independent or parallel investigation and is not conducted jointly with other agencies.

However, she pointed out that the results of the investigation conducted by other offices will also help them.

“Certainly, the result of any other investigation or of any gathered evidence from other agencies will also help us, definitely,” she said. “It will speed up the conclusion of the investigation. Ultimately, if any crime is committed or any administrative offense is committed, the case will come to us.”
Morales was interviewed after she gave the closing remarks at the two-day activity conducted in Cebu by the United Nations Office on Drugs and Crime together with the Office of the Ombudsman.

President Duterte, on the other hand, however, said that if there were “evidence to prove otherwise, then a case should be filed against the police.”

He repeated a statement he made in the first few days of his term that he would protect the police in the drive against illegal drugs, saying the Philippines had become a narcopolitic state, and he would do everything in his power to remedy the situation and protect the next generation.

“Walang dapat ikatakot ang mga pulis,” he said. “Suportado ko sila. Kung sabihin nila bakit si Duterte sinusuportahan ang pulis, natural, utos ko ’yun (The police have nothing to be afraid of. If they ask why Duterte is supporting the police, that’s natural, because they are carrying out my orders).”

Espinosa, who had been linked to the illegal drugs trade along with his son Kerwin and had executed an affidavit implicating top government officials, policemen and some members of the media, was shot dead in his cell at the sub-provincial jail in Baybay City, Leyte, on Nov. 5.

He was killed after he allegedly tried to shoot it out with elements from the Criminal Investigation and Detection Group in Eastern Visayas (CIDG-8) who were serving him a search warrant.

The police version of events came under scrutiny at a Senate hearing that started on Thursday, with lawmakers finding out that the operatives who came to see Espinosa had called for forensic investigators from the Scene of the Crime Operatives (Soco) even before the police officers could enter the jail and serve the warrant.

Several senators, however, said the President may have yet to be fully appraised of the suspicious circumstances surrounding the killing of Espinosa in the wake of a Senate hearing that found discrepancies and loopholes in the police narration of the story.

“I don’t think the President has been properly briefed yet on the recent developments, particularly the version of Criminal Investigation and Detection Group (CIDG) Region 8 policemen after they testified yesterday,” said Senator Panfilo Lacson, chair of the Senate committee on public order and dangerous drugs, who led Thursday’s hearing.

He noted that even the Philippine National Police leadership “recognized how they abused their authority in such a brazen manner.”

“If it’s an all-out war that the President is after as he clearly stated, the killing of Espinosa is more of a setback than gain as far as the protectors in and out of governance. The authorities lost the probative value of his testimony with his death. What a waste,” he said.

Senate Majority Leader Vicente Sotto III had a similar take.
“Perhaps he was not fully appraised of the circumstances yet. He must have been told that a drug lord was killed, but he was not told that bigger drug lords could possibly be behind the killing,” he said.

Sen. Leila de Lima, a committee member and fierce critic of Duterte’s all-out war on drugs, lamented the President’s pronouncement as he said it despite telltale signs, she claimed, that Espinosa was a victim of extrajudicial killing.

At Thursday’s nearly eight-hour hearing, Lacson said Espinosa’s slay was “premeditated” as he found out discrepancies between police logs and operatives’ testimonies.

Lacson pointed out that the raiding team called for forensics investigators to respond some 41 minutes before they even broke into the jail facility. Espinosa and fellow inmate Raul Yap turned up dead minutes later.

The inquiry also established that the raiding team of 19 men, including CIDG Region 8 head Supt. Marvin Marcos, failed to coordinate their mission with jail authorities and higher Philippine National Police officers, despite the involvement of a high-profile inmate.

Kerwin, tagged as the biggest drug lord in Region 8, was arrested in Abu Dhabi on Oct. 17.

“Hindi yun mamamatay. Ako bahala (He won’t die. I’ll take care of it),” the PNP chief said in an ambush interview when he arrived in Davao City after joining President Duterte’s official delegation in his Malaysia trip.

He said he will make up for his failure to protect Mayor Espinosa by ensuring the safety of Kerwin. “Sige na babawi nalang ako dito kay Kerwin, pakisabi doon sa pamilya what I failed doon sa father I will redeem doon sa anak. Pag uwi nun sisiguruhin ko na walang mangyari sa kanya (I promise to protect Kerwin. Please tell his family that what I failed to do to his father, I will redeem through his son. When he comes home, I will see to it that he would be safe),” Dela Rosa told reporters in Davao City on Thursday night.

He assured the younger Espinosa would be given “appropriate security” once he travels from Abu Dhabi to the Philippines.
“Tropa ko man lang ang magsundo sa kanya. Sisiguruhin ko na appropriate ’yung security na i-cocover sa kanya pagbalik niya although it doesn’t negate the fact na talagang siya ay drug lord (My staff would fetch him. I would make sure that he would have appropriate security when he returns although it doesn’t negate the fact that he is a drug lord),” he said.

Dela Rosa said the younger Espinosa will be detained at the PNP Custodial Center at Camp Crame.

“Crame, sa detention ng Crame ([He is] to be detained at Camp Crame),” he told reporters.

Mayor Espinosa stayed at the PNP’s White House when he surrendered to Dela Rosa last August amid allegations that he and his son were part of President Rodrigo Duterte’s list of alleged drug lords.