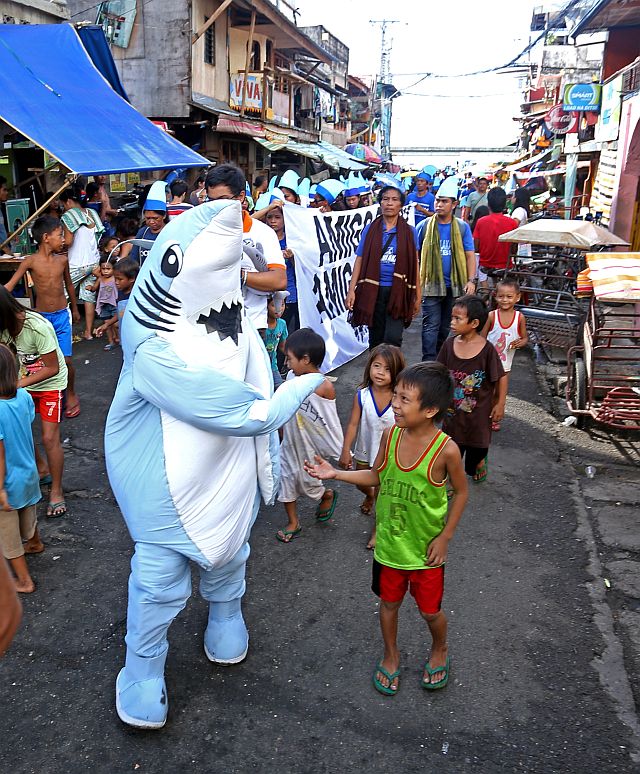 SHARK PARADE. Environmentalists headed by Greenpeace advocates marched at the Pasil Fishport, Tuesday, to protest the selling of shark meat at the market. They later proceeded to the Cebu City Hall for the historic signing of an executive order by Mayor Tomas Osmeña banning the catching, selling, possession and trading of all shark species and its derivatives in Cebu City. (CDN PHOTO/LITO TECSON)

History was made on Tuesday when the entire Cebu became the first and only island in the Philippines to ban the catching, selling, possession and trading of all shark species and its derivatives after Cebu City sealed the deal to prohibit such activities in its territory and joined the province in the ban.

A “Shark and Ray Protection Order” signed by Mayor Tomas Osmeña now prohibits everyone from fishing, taking, possessing, transporting, selling or disposing of the species, including any body parts or derivatives thereof within the territorial jurisdiction of Cebu City.

Osmeña’s executive order for the protection of shark, rays and chimera species was signed after pro-shark crusaders under the environmental nongovernmental organization Greenpeace met with the mayor at City Hall following a “shark parade” from the Pasil Fish Market earlier in the morning, participated by about a hundred fisherfolk and marine protection advocates.

Cebu City plays a crucial role in the overall conservation of shark species as it is an important landing and trading area for fish and other marine products coming from other areas of Visayas and Mindanao.

The city also hosts the biggest fish market in the region.

Greenpeace, in a statement released, said that the signing of the executive order by Osmeña meant that the whole of Cebu Island now had local ordinances seeking to protect sharks.

Vince Cinches, oceans campaigner of Greenpeace Southeast Asia, said that the decision of Osmeña to sign the order was important because it turns the whole of Cebu into a shark and ray sanctuary and will also disallow the selling of sharks and rays in the Pasil Fish Market.

Aside from Cebu being the country’s first and only shark and ray sanctuary, Monad Shoal near Malapascua Island in Daanbantayan is the only place in the world where thresher sharks could be viewed with certainty on a daily basis, according to Greenpeace.

Bimbo Fernandez, Osmeña’s executive assistant on special concerns, meanwhile said that the protection of key marine habitats within Cebu Citys j’urisdiction was a priority of the mayor.

“Market intervention is crucial to the overall efforts of protecting sharks, rays and the marine environment, and we call on our national counterparts to legislate a bill to sustainably manage shark and ray species so that all our efforts will not go down the drain,” said Fernandez, adding that Cebu City agrees in the need to go beyond protecting species listed in Cites (Convention on International Trade in Endangered Species).”

The group plans to bring their campaign for the protection of sharks and other marine species to a national level through the creation of interconnected ocean sanctuaries.

They also urged the Senate to hasten the passage of Senate Bill 905 which seeks to protect all shark and ray species found within the country’s Exclusive Economic Zone.

For his part, Dr. Alessandro Ponzo of the Large Marine Vertebrates Research Institute Philippines noted the unprecedented decline in shark and ray species and the need to engage local communities in the protection of precious marine life.

Pointing out the importance of sharks, Ponzo said that they are critical to maintain the balance of ecosystem.

“They are not just top predator … It is very important to protect them now before it’s too late,” he said.

The Cebu City Market Authority has been given 90 days by Osmeña to issue implementing rules and regulations pertaining to the mayor’s new executive order.