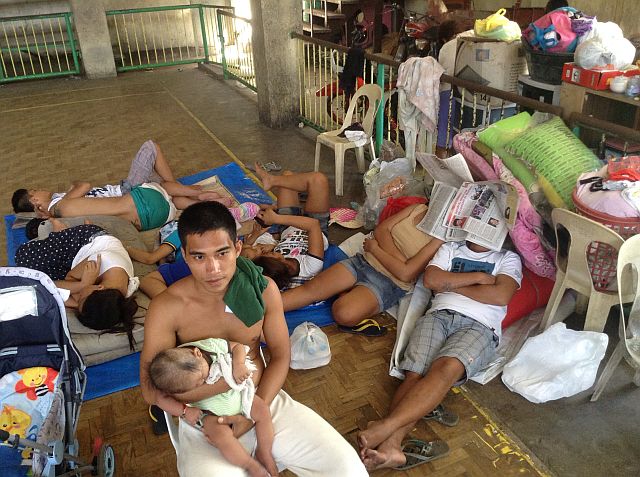 ROCEL Quijano, 28, together with his wife and two little children, was in Barangay Opon, Lapu-Lapu City to offer their prayers during the feast of the Virgin of the Rule when the fire ravaged several houses in Barangay Suba.

His brother called him and they hurried home, but it was too late. All that was left were rubble and ashes.

“What’s left with us were my youngest child’s stroller and their clothes,” he said.

Starting anew seemed difficult for Quijano’s family. He has no stable source of income. To make ends meet, his wife takes home service pedicure jobs from time to time. Sometimes, he would sell fish at the Pasil fish market. Sleep has been elusive for him since they moved to the sports complex.

“I would wake up in the middle of the night (because) of the sweltering heat. And there are lots of mosquitoes here, too,” Quijano related.

He hopes that the government will give them housing materials so they can start rebuilding their home. “I also hope they can give us medicines and vitamins so we can survive the condition here,” he said.

Cebu City Mayor Tomas Osmeña had earlier announced that he would double the financial assistance for fire victims and provide them with building materials in order for them to rebuild their homes.

The fire victims in Sitio Wakwak, Barangay Suba are beneficiaries of the city’s Slum Improvement and Resettlement (SIR) project and thus could rebuild their homes.

“Restoring is more the word. It is already designed for the urban poor under the SIR. We will have to restore that,” the mayor said.

He said he donated bed sheets and milk drinks to the fire victims.

Suba barangay secretary Amie Ledesma said that aid from various concerned groups and individuals has started pouring in for the 861 individuals affected by the fire. The Department of Social Welfare and Services (DSWS) began donating packed meals. Several relief goods are still coming from other concerned parties.

“DSWS will provide packed meals for the affected families for three days and after that, they will give canned goods to them. An anonymous donor also came here to donate a box full of school supplies,” Ledesma told Cebu Daily News.

A consultation with fire victims is scheduled on Saturday to discuss the details of the proposal, which Bañacia said has been presented to the mayor.

“It is still a concept. We are going to consult them (fire victims) about this because they might have better ideas, but this is our approach,” he said.

He explained that the water system will be installed right in the middle of the community, accessible to all the residents. The tank would be filled with water that they could use during fires and at the same time they could also use as a storage facility during El Niño in the summer season.

“They will have water and they will be the one to maintain it,” he said.

This water system could collect rain water that would be stored in the tank. The water system would include pumps that could be used during emergencies.

There will be fire extinguishers and a generator set to be provided by the city government, Bañacia said.

Division for the Welfare of the Urban Poor (DWUP) head Genevieve Alcoseba said they highly encourage the fire victims to support the project.

“This is for them, for their families. With this, we would no longer purchase more fire trucks,” she said.

She said Barangays Suba and Sawang will be the pilot area for the project.

The cost for the project is yet to be determined but this would be charged from the city’s P300 million disaster fund.