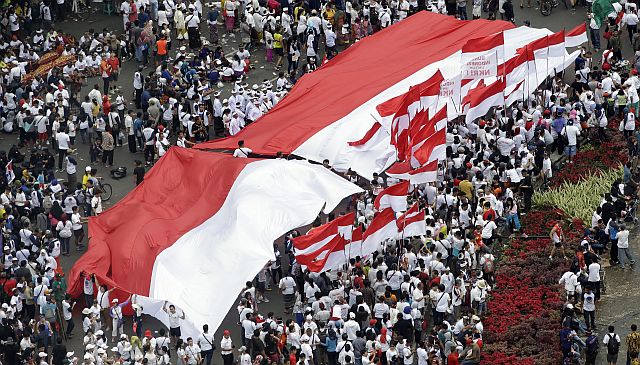 Indonesians display a large red and white national flag and smaller ones during a rally in Jakarta, Indonesia, Sunday, Dec. 4, 2016. Thousands of people staged the rally in attempt to demonstrate national unity as religious and racial tensions divide the world’s most populous Muslim nation. (AP PHOTO).

Jakarta, Indonesia — Tens of thousands of Indonesians rallied in the center of the capital Jakarta on Sunday, calling for tolerance and unity after massive protests by conservative Muslims against the city’s minority Christian governor.

The crowds filled a major traffic circle in the heart of the city and sprawled into its main thoroughfares.

The demonstrators waved “We Are Indonesia” signs and a giant red-and-white national flag was held aloft by hundreds of people.

The capital of Indonesia, the world’s most populous Muslim nation, has been rocked in the past month by two major protests against Gov. Basuki “Ahok” Tjahaja Purnama, who is being prosecuted for alleged blasphemy. The movement against Ahok, the first ethnic Chinese to be governor of Jakarta and the first Christian in half a century, has raised communal tensions and challenged Indonesia’s reputation for practicing a moderate brand of Islam.

A demonstration against Ahok on Friday drew at least 200,000 people. An anti-Ahok protest on Nov. 4 attracted at least 100,000 people and turned violent, with one dead and dozens of protesters and police injured.

Organizers called it the “Parade of Indonesian Culture” and it featured traditional dances from Sabang in westernmost Aceh to Merauke in easternmost Papua.

National leaders of political parties under the pro-government coalition behind President Joko “Jokowi” Widodo, an ally of Ahok, delivered short speeches on the importance of keeping the ethnically diverse nation united.

“We have to fight to materialize the aims of our independence. That will not happen if we are scattered, blaspheming, humiliating each other and no longer trust each other,” Surya Paloh, chairman of the National Democratic Party, said from the main stage.