Bridges to link Cebu to Bohol, Leyte, Negros Or. pushed 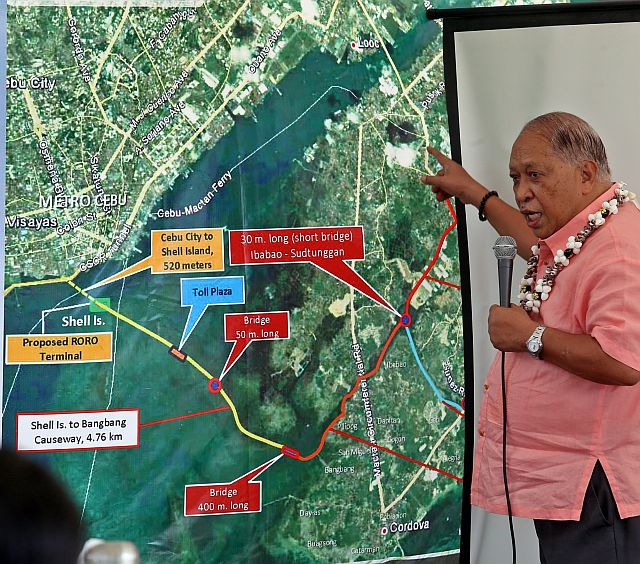 Former Cordova mayor Adelino Sitoy, Presidential Adviser on Legislative Affairs and at the same time head of the Presidential Legislative Liaison Office, discusses another bridge project in this 2015 file photo.

If plans don’t miscarry, travel to Cebu from Bohol or even as far as Leyte and Negros Oriental on the western side of Cebu will just be one road trip or even a train ride away.

Former Cordova mayor Adelino Sitoy, Presidential Adviser on Legislative Affairs and at the same time head of the Presidential Legislative Liaison Office (PLLO), said yesterday that they have been proposing a public-private partnership (PPP) project for the construction of bridges connecting Negros Oriental to Cebu, Cordova to Getafe town in Bohol, and Carlos P. Garcia town in Bohol to Maasin City in Southern Leyte.

“We have already told the President (Rodrigo Duterte) about this. He has approved this project in principle but asked us to refer this to (Transportation) Secretary (Arthur) Tugade,” said Sitoy, who quit as vice mayor of Cordova town after he was appointed by Duterte to his Malacañang positions.

Sitoy revealed the proposed PPP projects after he was asked to comment on the National Economic and Development Authority (Neda) Board’s recent approval of the Bohol-Cebu Friendship Bridge project.

He said that he plans to meet with Bohol 2nd District Rep. Erico Aumentado regarding the project since he said there are also other proposals for interisland linkages in the Visayas island.

Unlike Aumentado’s proposal, Sitoy said their proposed bridges will have a railway component where the bridges will connect.

Sitoy said he doesn’t know details about Aumentado’s proposal yet and that he wants to meet with the congressman in order to compare their proposals.

Whatever is more advantageous to the government should be followed, he said.

Right now, Sitoy said they are still under negotiations with interested investors and contractors who wish to undertake the project.

He said though that he cannot disclose the interested investors yet, adding that they were the ones who approached the government for the project after Duterte won as president.

Sitoy recalled that he has been in talks with Aumentado’s father, the late former Bohol Gov. Erico Aumentado, who originally wanted the project but could not see its fruition before he died.

“The railroad will bring a lot of benefits because travel will be faster. There will be a lot of passengers that can avail of this and transport of products will be cheaper,” he said in Cebuano.

He added that this will boost tourism and economy in the Visayas since several islands will already be connected.

Sitoy said they hope to finish the documentary preparations for the PPP by next year so that actual works can start by 2018.

The Neda Board, however, approved the Bohol-Cebu Friendship Bridge (BCFB) after President Rodrigo Duterte endorsed the project construction to the Chinese government for funding when he visited China in October, said Rep. Erico Aumentado of Bohol’s 2nd district.

“The BCFB was included in the list of Neda’s list for feasibility study for China,” said Aumentado.

“It has already been completed but not comprehensive,” he said.

According to Aumentado, a feasibility study and pre-engineering work could start as early as next year should the proposal be approved.

The feasibility study will determine the next move of the government whether to operate through Build-Operate-Transfer (BOT), public-private partnership (PPP) or concessional loan.

He said part of the study would include the possibility of using the bridge as power connector for the excess power of Cebu and if it would be feasible for excess water to be sold to Cebu as additional income to the province.

The BCFB was initially dubbed as a “3-in-1” project because it would make possible the selling of water from Inabanga River to Mactan through a pipe attached to the bridge and at the same time, bring in cheaper power from Cebu to Bohol, which didn’t produce its own power unlike Cebu which had several power plants.

The bridge would be anchored in Getafe town, Bohol, and Cordova town on Mactan Island, Cebu. The distance between two towns is 17.5 km.

Except for the Olango and Hilotongan Channels, he said, the two provinces are separated by islets, shoals and shallow seawaters. “This augurs well for a simple design and easy construction of the bridge,” Aumentado said.

Before the death of the elder Aumentado in 2012, he was able to ask the Department of Public Works and Highways (DPWH) to endorse his proposal for technical assistance to the Korean International Cooperation Agency (KOICA).

The technical assistance was for a grant for the conduct of feasibility study and detailed engineering design.

Aumentado stressed the bridge between Cebu and Bohol would boost trade, commerce and even tourism in the two provinces.

“The impact, especially in 2nd district, is tremendous. Housing projects will sprout. Farmers can bring produce direct to the bigger market. Consumer spending will increase with the expected weekend vacationers from Cebu to soar,” he said.

Passengers will no longer be stranded whenever there are gale warnings since they can take a bus in going to Cebu, said Aumentado. Tourism will be the biggest beneficiary as Bohol’s more rustic laid-back tour sites will be complemented by Cebu’s more sophisticated packages including a vibrant night life — almost as bombastic as Manila’s.

“The tour synergism between the two provinces will be enhanced, developed and improved,” he said.

“Details will be further discussed in our next meeting,” he said.

Meanwhile, businessmen in Cebu looked forward to the completion of the BCFB.

They said that the bridge project will spur growth in both provinces’ economies.

The industry to benefit from the project include tourism. They also see a drop in prices of cement and gasoline.