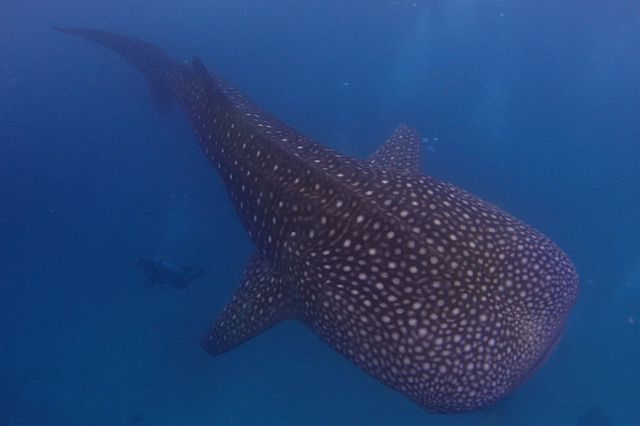 The International Union for the Conservation of Nature (IUCN) declared the Rhincodon typus (whale sharks) as endangered just last weekend. They are a star attraction in Oslob town. (CDN FILE PHOTO).

As the ten Miss Universe candidates accompanied by 2015 Miss Universe Pia Wurtzbach tour Cebu today, concerns have been raised over one of the activities scheduled — swimming with the whale sharks in Oslob town, some 130 kilometers south of Cebu City.

The once sleepy town of Oslob has become a tourist hub for whale-watching ever since the whale sharks, locally called butanding, have been seen in the area and have become very used to people because they are fed with shrimp fry.

Whale sharks are considered an endangered species. But local fishermen have been feeding these gentle creatures, who have gotten used to having people swimming around them.

So famous is swimming with the whale sharks that that is now one of the attractions for the Miss Universe candidates, which would all the more bring international attention and visitors to Oslob.

However, according to some environmentalists, these do not usually translate to better conditions for the gentle giants.

The whale sharks are exploited for money at the expense of endangering their health, netizens posted on line.

In an interview, Cebu Vice Gov. Agnes Magpale said the provincial government was not the one that decided the itinerary of the candidates, but seeing that they would be dropping by in one of the most famous tourist spots in the province, the province of Cebu welcomes them.

Magpale said she was aware of the concerns that have been raised by netizens over the adverse effects the visit would cause to the whale sharks, but she explained that measures have already been set in place by the local government unit of Oslob when it comes to interacting with the whales sharks, such as the distance limit and the prohibition of using “lotion” when one is diving in the area.

However, Magpale pointed out that at present, there is no ordinance or national law prohibiting the feeding of these whale sharks.

Feeding these creatures is an issue constantly at the forefront when it comes to the welfare of the animals.

Meanwhile, security arrangements are now in place for the Miss Universe candidates as they tour the southern part of the province today.

Cebu Provincial Police Office (CPPO) Director, Senior Supt. Eric Noble said the police and the Armed Forces of the Philippines (AFP) have joined together to ensure the safety of the beauty queens and their entourage.

The security preparations have been in place since the US Embassy announced a travel advisory to Americans about possible terrorist attacks in southern Cebu last November.
“Wala yung threat. Grabe na ating preparation simula nang nag-advisory ang US Embassy. Kung maniniwala tayo agad-agad sa mga sabi-sabi, hindi tayo maka-move on (There is no threat. We came up with so much security preparations right after the advisory from US Embassy. If we easily believe in rumors, we cannot move on with our lives),” Noble said.

There are 60 tourist policemen and a 14-man team composed of operatives from the Regional Public Safety Battalion (RPSB) and Armed Forces of the Philippines Central Command (AFP CENTCOM) deployed in Oslob, and they will be also the ones securing the candidates today, he added.

The pageant candidates are expected to arrive in Oslob at 9 a.m. for whale-watching, as among their activities.

“We are secured. We have the Navy, Air Force and the Coast Guard augmenting our local police force,” Noble said in Tagalog.

Meanwhile, Police Regional Office (PRO-7) director Chief Supt. Noli Taliño assured the public that there are no terrorist threats in the region.

A text message received by the police containing a message that a group from Mindanao will attack Cebu from December 11 to 14 has not been validated, Taliño said.

The public is advised to not spread text messages about unvalidated terrorist threats that could be a cause of alarm./with Danica D. Castro, USJR Intern