DOT exec: Oslob may be out of Miss U show 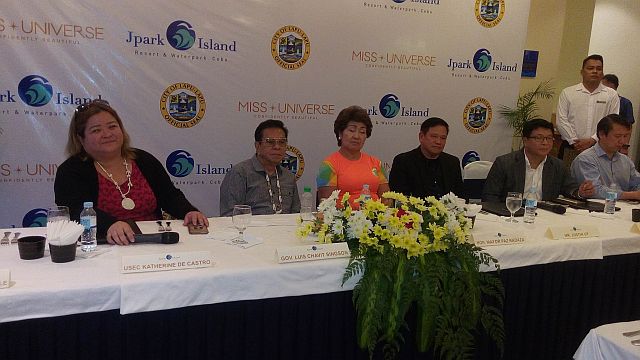 Whale shark watching in Oslob town in southern Cebu may not be included in the final show of the Miss Universe pageant, which will involve 90 candidates.

Tourism Undersecretary Katherine de Castro said that they are considering the possibility of not including whale shark watching in Oslob in the final show to heed the clamor of various groups against it.

Concerned netizens and environmentalists took to social media to show their disappointment at the inclusion of Oslob’s whale shark watching in the candidates’ itinerary during their visit in Cebu yesterday.

Environmentalists and netizens issued a plea asking Miss Universe candidates not to swim with whale sharks in Oslob.

The netizens and environmentalists said that the the pageant is supposed to be a platform that promotes environmental protection and social awareness.

De Castro said they would take this position into consideration, but the decision would ultimately be up to pageant organizers.

“We were asked if we had any wildlife to feature. I mentioned the Philippine eagle and whale sharks,” she said in a press briefing on Tuesday at the Jpark Island Resort and Waterpark in Lapu-Lapu City, the venue of the pageant’s swimsuit tilt on January 17 next year.

The Philippines is only one of the few countries where whale sharks are present.

Oslob, a once sleepy town 130 kilometers south of Cebu City, has become known as a venue for recreation ever since whale sharks started visiting its shores and the local government took advantage of it.

Miss Universe candidates were scheduled to visit Cebu on Tuesday following the pageant kick-off last week, and among the places they were recommended to visit was Oslob.

De Castro clarified that what they did in Oslob was simply an ocular inspection and that only five candidates were present, minus the pageant production and staff.

De Castro, however, said, that the DOT is determined to feature both the Philippine eagle and whale shark in the final show.

She said if not in Oslob, organizers may opt to do it in Donsol, Sorsogon instead.

De Castro also emphasized that prior to their visit, there was a series of meetings conducted with the provincial and local government.

She said she was given assurance that the town’s whale shark encounter was more manageable now than it was before.

“So we pushed through with it. But let me emphasize that we hear your pleas,” said De Castro.

Joselito “Boboi” Costas, Cebu Provincial Tourism Officer, also said that he thought it was wise to consider not pushing through with the activity.

“I think it’s a wise decision considering that Miss U organization prides itself as an organization that stands for something: AIDS, education, environment, etc.,” said Costas, who believed that there was already “recreational overcrowding” in Oslob town.

Vince Cinches, oceans campaigner for Greenpeace Philippines, for his part, welcomed the statement of De Castro.

Cinches said in an statement that there is a need for DOT to issue a public statement saying Miss Universe candidates will no longer go to Oslob next year.

He said organizers should refrain from using photos or footage of candidates swimming with whale sharks in all promotional materials and during the pageant proper.

He also called on them to publicly state that feeding whale sharks is wrong and that they will promote responsible tourism.