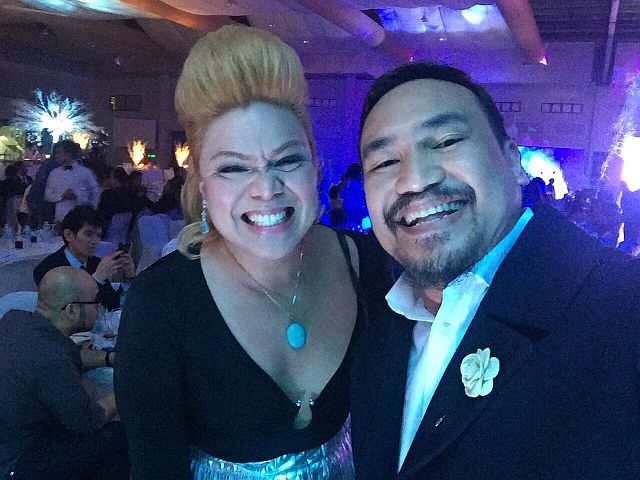 AT THE QBE WINTER BALL year-end party with Shaq Ablen of their European Operations group. Shaq and I have known each other from college in UPLB! Oh those days, eh, Shaq?

I HAVEN’T written you in a while.

Not because I felt I had nothing to say that was both intimate enough to be interesting (intimacies are always a point of interest, no?) and yet universal in a way a good song transcends personal experience and becomes a shared one. I’ve been sorely trying to find that balance. I’ve been askew these past few months.

The end of the year is always the right time to right oneself, I think.

And, boy, was it a strange one. This was the year (ah, you naughty Monkey) the improbable unfurled that many are still reeling from the stinging reality check. Duterte is president of the Philippines, Trump is in the White House, Aleppo unfolds its horror daily, hate-mongering is in vogue, and my niece Kaanyag and little nephew Kaio turned 8 and 2. Why end the sentence on a hateful tone when there are little victories to celebrate, yes? Balance.

It will be a challenging Christmas for families with the new divides. “I have two separate family chatrooms now,” giggles a friend. “One for the pro-Duterte members, and the other for the family members who are not fans.” In swift, decisive keystrokes, we’ve weeded out many from our list on Facebook, too.

Some are simply hidden (you still think of them as friends, even if their political opinions run contrary to yours), while others have been unfriended (hey, we weren’t that close to begin with, good riddance), and there are the choice few who have been blocked (there is no redeeming value to you, and you encroach on other peoples’ spaces to impose your opinions … not in my house, no). We’ve assigned people to the concentric circles of Dante Alighieri’s inferno. Does that make us the Devil?In many ways, yes.

And yet we brace for New Year’s Eve, my favorite time of the year, and that much-awaited reboot. I tried not to wax feng shui, but the metaphor was just begging for it. As we pass from an emotionally exhausting 2016 to the Year of the Rooster, the new day is announced by the crowing of a cock.

And if you start the year with that mental image, how hard can it get, really?