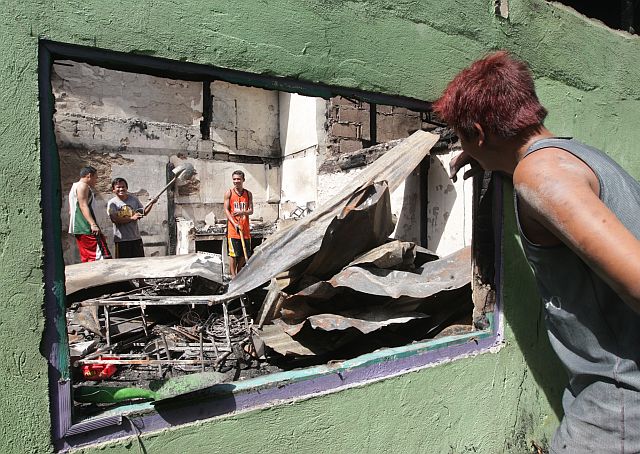 Fire victims salvage what is left of their house that was damaged by the fire in Barangay Tangke, Talisay City. (CDN PHOTO/TONEE DESPOJO).

Around 80 individuals may likely spend their Christmas at an evacuation center after their houses were razed by the fire last Tuesday evening in Sitio Magay, Barangay Tangke, Talisay City.

About 19 houses were totally damaged by the fire, while four others were partially burned, according to SFO2 Rodulfo Luage, chief investigator of the Talisay Fire Station.

According to the barangay, 45 families or 77 individuals were affected by the fire, and some of them were evacuated at the barangay hall.

The fire was allegedly caused by the toppled gas lamp at the house of Isidro Gasalatan.

Gemma Gasalatan, the daughter of Isidro, told Cebu Daily News she was sleeping together with her four children on the ground floor of their house when the fire broke out.

“Pagmata nako dako naman ang kayo. Wala na koy nakuha maski usa kay giuna nako ang mga bata (When I woke up, the fire was already big. I was not able to get anything since I secured my children first),” Gemma said.

She admitted that they lighted a lamp, but she was not sure what really happened since they were already sleeping.

Cabanes said the City Social Welfare and Development (CSWD) will give financial assistance worth P10,000 to each of the affected families.

Yesterday, instead of having their Christmas party, the barangay officials decided to give their raffle prizes such as rice and canned goods to the fire victims.