P3 M worth of properties damaged in three Mandaue fires 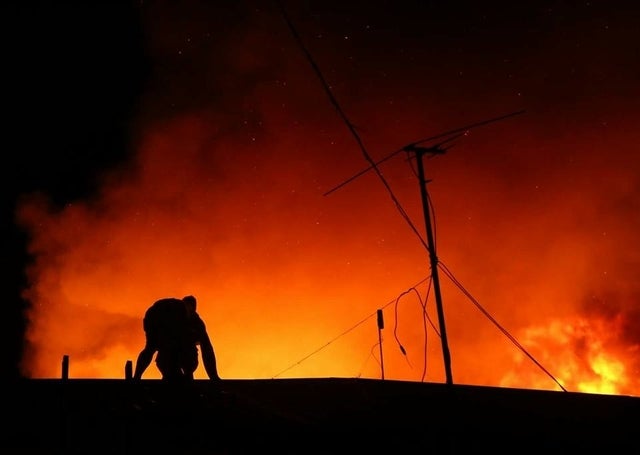 Silhouette of man on top of a house about to stand up to look at the fire (CDN PHOTO/TONEE DESPOJO).

As fireworks illuminated the sky at the start of 2017, fire razed three different areas in Mandaue City, destroying a warehouse and at least 210 homes displacing 450 families.

About P3 million worth of properties went up in smoke in the three fire incidents.

The first fire alarm was received at 12:27 a.m. on Sunday when a warehouse along Ouano Street in Barangay Looc caught fire.

The two guards of New Derke Warehouse owned by Mr. and Mrs. Shinley Lee told investigators that a wayward sky lantern hit a portion of the storage house’s roof made of plastic.

After about five minutes, the warehouse, where assorted plasticwares were kept, was devoured by fire that lasted for about five hours.

At 1:01 a.m., another fire struck a community in Sitio Sto. Niño in Barangay Guizo, destroying 90 houses with 300 families. The fire started at the house of Paulinian Ompong.

Based on their investigation, Vergara said a faulty electrical connection inside Ompong’s house sparked when the latter switched on a light bulb at their altar.

Ompong and residents of the place quickly left their houses to save their lives.

Investigation showed that an electrical short circuit may have triggered the fire that started at the house of Bebot Cayoca.

Damage was estimated at P1.2 million.

Vergara said firemen and fire volunteers from the nearby cities of Cebu, Lapu-Lapu, and Talisay came to help put out the three fires.

Felix Suico, head of the Mandaue City’s Local Disaster Risk Reduction and Management Office, said they did not expect three fires to occur on the first day of 2017.

“We are nonetheless happy that we managed to respond and control them,” he said in an interview.

Fire victims in Barangay Guizo are temporarily taking shelter in one of the village’s basketball courts while those affected by fire in Maguikay are staying at the Sitio Salvacion gymnasium.

The Mandaue City government led by Mayor Luigi Quisumbing visited and distributed food to the fire victims on Sunday morning.

Quisumbing said the City Social Welfare Services (CSWS) has also set up tents near the fire sites to attend to the needs of the victims.