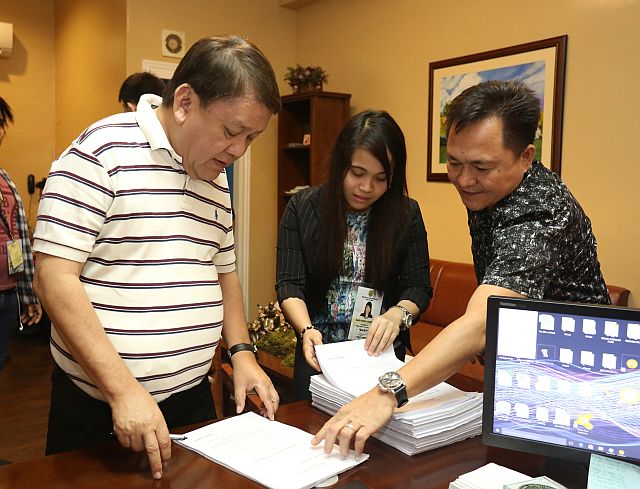 Cebu City Mayor Tomas Osmeña is personally reviewing the business permit applications of three banks in Cebu City as he ordered the City Treasurer’s Office (CTO) not to process their renewals. He said East West Bank, Bank of the Philippine Islands, and Banco de Oro will have to submit their renewal applications directly to the Mayor’s Office.

He said these banks are under investigation for allegedly under-declaring their gross sales/receipts in their application for the renewal of their business permit.

“I am personally investigating each of all these banks. These three groups of companies are in my negative list because of a derogatory information, particularly in the anomalies they have been involved,” he said.

He said that he will go through each of all the banks like they are examined under a microscope and that he is putting them under intensive care.

“They are in my negative list. I call it a Sh*t List of my enemies. I will fight anything illegal against them,” he said.
Osmeña said he does not mind that it looks like he is going after his enemies. What is important, he said, is protecting the interest of the city.

“They want to steal our property, I know how to fight back,” he said.

He said he finds no problem if these banks would refuse to submit their application for renewal of business permit.

“It is not going to be renewed. If they don’t submit, that is fine with me. I don’t care. The more I can close it,” he said.

He added that if illegal methods continue, the entire legitimacy of the Philippine government will be at stake, including that of the criminal justice system.

“Ngano nga mga ginagmay ra? (Why only the small businesses?) What about the big ones? Did President (Rodrigo) Duterte say that he will run after big grafters?” asked Osmeña.

The banks will be allowed to continue operations, until they find faults, the mayor added.

“Then we will file a charge and they can answer it in court,” he said.

Meanwhile the Cebu City government issued a show-cause order to Banco de Oro-Magallanes Branch asking them to explain why the city should not revoke their business permit and close the branch for alleged tax fraud.

This came after Osmeña filed a criminal complaint against the BDO executives and board of directors last Wednesday.

The mayor accused them of “falsification,” “other deceits,” “false statements” and violating the City Tax Ordinance.

BDO was given five days to reply to the show-cause notice.

Osmeña said that BDO has declared P400,000 as their gross revenue for a year.

“It is very blatant. Their income is not even enough to pay the salary of the bank manager. How can you believe that?” asked Osmeña.

“If they say, ‘You know Mr. Osmeña, if you will be attacking SM and Ayala, who will invest in the SRP (South Road Properties)?’ My answer is I don’t give a damn because we don’t own the SRP anymore. What do we have to lose?” the mayor added.
BDO Unibank, Inc. is an SM Group affiliate firm.

Read Next
Sinulog activities to continue, rain or shine