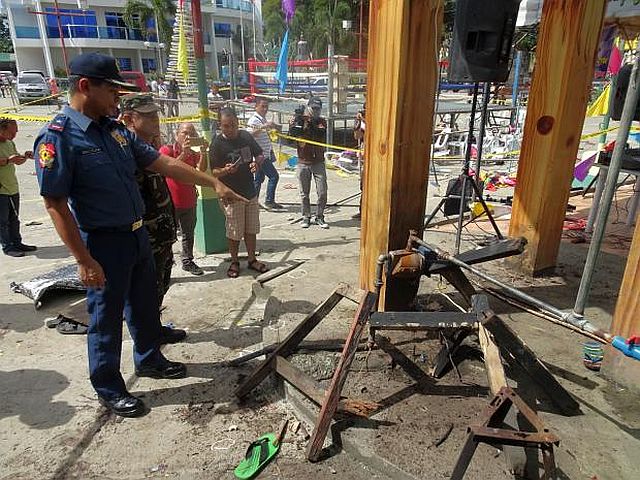 TACLOBAN CITY, Leyte — The chief of the Hilongos town police in Leyte was removed from his post, effective Jan. 5, nine days after the sleepy municipality was rocked by twin explosions that wounded 32 people.

Chief Insp. Alberto Renomeron Jr. was transferred to the Leyte Provincial Police Office where he would be on a “floating status,” meaning he would not have any assignment.

Rentuaya said the relief of Renomeron was part of standard operating procedure during an ongoing investigation.

“But he (Renomeron) is still part of a special task force created regarding the incident in Hilongos,” she said.

Chief Supt. Elmer Beltejar, PRO-8 director, created the special task force to help hasten the investigation on the bombings at the Plaza Rizal in Hilongos that wounded 32 people, 10 of them children.

The first improvised explosive device, an 81 mm mortar, exploded at 9 p.m. near the water tank, about 50 meters away from the stage where a local boxing bout was taking place as part of the festivities for the town fiesta.

A minute later, another IED exploded near the stage.

Police operatives have been looking for three men who planted the IEDs based on the footages recovered from nearby closed-circuit television cameras.

A syndicate involved in illegal drugs and fake money was believed to be behind the bombings.

Police believed that the crime gang wanted to retaliate against the police for arresting their female drug courier and confiscating their fake P1,000 bills.