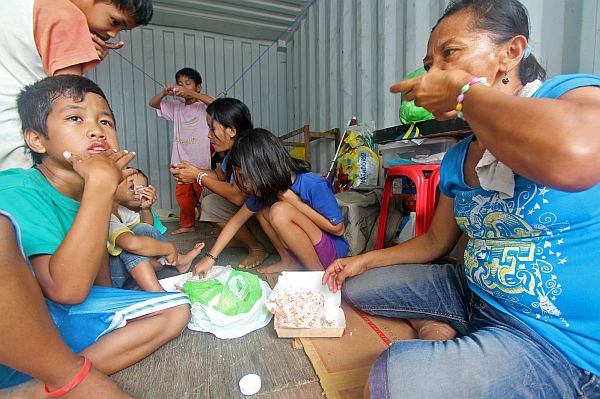 The place, which is right beside the old Compania Maritima building near City Hall, is actually a row of forty 20-footer container vans lined up as temporary shelter for out of town Santo Niño devotees who have no place to stay in the city.

For this year’s Santo Niño fiesta, new rules had been set for its occupants, including the segregation of men from women and children in the sleeping arrangements.

For everyone’s safety and security, boys aged 13 and above will be asked to stay with the men, said Department of Public Service (DPS) chief Roberto Cabarrubias, chairman of the Devotee City committee.

Each container van, provided by the cargo firm 2GO, can accommodate between 30-50 people, Cabarrubias added.

To prevent accidents resulting from mud puddles in the area, the site grounds were concreted this year.

For the first time since Devotee City began in 1995, the Cebu provincial government is taking part in its operations by providing area security and emergency responders.

Policemen from the Cebu Provincial Police Office (CPPO) have also been assigned to help secure the premises in coordination with the city’s police force.

As early as yesterday morning, would-be occupants started to arrive at the site, with some of them saying that they had been waiting for the place to officially open since Wednesday night.

With the influx of early visitors before the start of the official registration period, the Cebu City government said they had no choice but to accommodate them a day earlier.

Once registration officially begins today at 9 a.m., the early occupants will be asked to go outside and form a queue to register along with the new arrivals, said Cabarrubias.

“That’s because when they register, we will raffle off their names to determine which sleeping quarter will be assigned to them,” said Cabarrubias in Cebuano.

Those who wish to stay in Devotee City will be required to show their bus or boat tickets to prove that they are from out of town.

Among those who arrived early was the Panselyna family from San Remegio town, northern Cebu.

They arrived Wednesday evening in Cebu City and headed straight to Devotee City.

Three generations of Panselynas — Jennylyn, her husband, three children, mother and three sisters, had been joining the festivities for years while staying at Devotee City.

Jennylyn’s family sells oranges and apples in a stall at the San Remegio Public market. But every Fiesta Señor, they all travel more than sixty kilometers to Cebu City to attend masses and to pay homage to Santo Niño.

To sustain their stay in the city, the Panselynas sell fruits during Sinulog week at the downtown area.

Their meager income from selling apples and oranges is barely enough, said Jennylyn, but that does not bother them.

What is important, she said, is that they have paid homage to the Child King.  “Pagtuo ug pag-ampo sa Santo Niño molabaw jud sa bisag unsa (Faith and prayers above all else),” said Jennylyn.