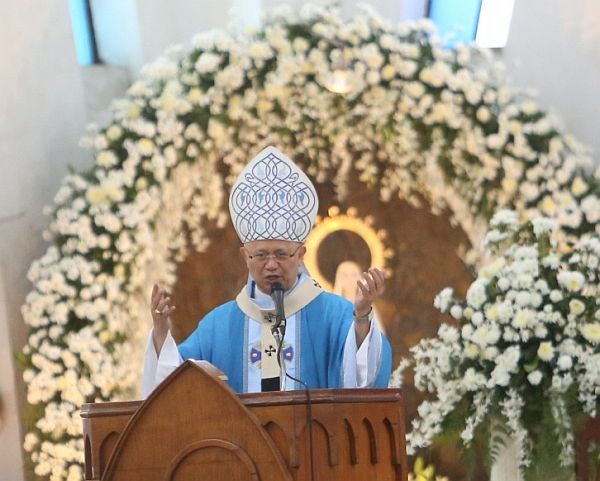 Healing, not punishment or death is the solution to drug addiction.

Cebu Archbishop Jose Palma said this is the right approach in fighting the drug menace.

“Drug addiction is more of a mental sickness. The solution to address it is not punishment or death. The right approach is healing,” said Palma in a Mass he celebrated to mark the 25th World Day of the Sick and the 159th anniversary of the apparition of the Blessed Virgin Mary in Lourdes, France.
With this, Palma cited the need for drug surrenderers to undergo rehabilitation, one of which is promoted by SuGod (Surrender to God) Drug Recovery Program of the Love of God Community, a charismatic group headed by Fe Barino.

Palma’s statement came a few days after he reiterated the Catholic Church’s stand opposing extrajudicial killings amid the government’s war against drugs.

He also lauded yesterday health care workers and those who continued to take care of the sick.

“Our Lady asks us to care for one another especially the sick. Jesus himself told us that whatever we do to the least of our brothers and sisters, we do it to Him,” said the 66-year-old prelate, who celebrated the Mass at the Archdiocesan Shrine of Our Lady of Lourdes in Barangay Punta Princesa, Cebu City.

Palma later led the “episcopal coronation” of the church’s patroness in celebration of the 60th anniversary of the establishment of the parish.
Thousands of people trooped to the shrine to witness the event and to pray to the Blessed Virgin Mary.

He also called on the faithful during the celebration to lean on God and be refreshed by his love.

“In the beginning, everything God created was wonderful, but because of sin, human beings experienced imperfections, shortcomings, and illnesses. The good news is we have a God who loves us,” he said.

Palma said sufferings and illnesses are occasions to strengthen one’s faith and to share in Jesus’ salvific passion and death on the cross.
He also encouraged the faithful to offer their sufferings to the Lord for the good of humanity.

“We believe that whatever we suffer in union with the Lord becomes salvific and a source of grace,” he said.

The World Day of the Sick was instituted by St. John Paul II in 2002, just a year after he was diagnosed with Parkinson’s disease.
After communion, Palma carried the Blessed Sacrament in a monstrance and blessed the faithful.

“The Eucharist is the source of healing—physical and/or spiritual. May God’s love strengthen. Despite our sufferings, He will make life beautiful and meaningful,” he said.

At the Cebu Metropolitan Cathedral, at least 200 people — some wheelchair-bound – attended the 9:30 a.m. Mass, which ended with the exposition of the Blessed Sacrament.

Masses for the sick and the elderly were also held in other churches in the Cebu Archdiocese. / USJR Intern Jheysel Ann S. Tangaro