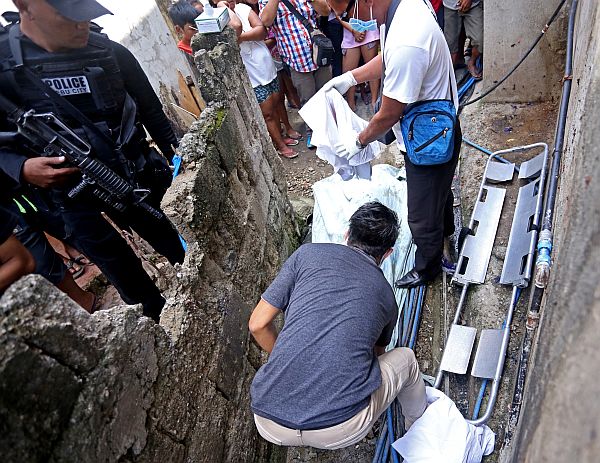 A 32-year-old “habal-habal” (motorcycle-for-hire) driver was killed after a rifle grenade he found on a vacant lot exploded past 9 a.m. in Sitio Tambisan, Barangay Tisa in Cebu City.

Ruben Genterone, the youngest of six children, didn’t know that what he found was a grenade, said his mother, Loreta.

She said she saw her son bringing a piece of metal that appeared to be a flashlight.

“Basin gusto niya ipatimbang (Maybe, he wanted to sell it in the junk shop),” the 69-year-old mother said in an interview.

Loreta said the victim scratched the piece of metal using his fingers before leaving their residence. After a few minutes, Loreta heard a loud explosion.
“He (Genterone) picked up that grenade in a vacant lot near our house. I asked him what is was, but he said it was just nothing and walked away,” she said in Cebuano.

She was then informed by neighbors that the piece of metal her son was bringing exploded.

Ruben lost his arms in the blast, which also badly damaged his body and face.

“There’s a possibility that the grenade’s pin was removed,” he said.

Dacua said the explosion was an isolated case and had nothing to do with terrorists.

From 1986 to 1988, Dacua said the vacant place where Genterone found the rifle grenade served as a rebel hideout.

“Probably, the rifle grenade was left in the area. I don’t think that was something vintage because we still have those kinds of grenades until now,” he said.

Neighbors of the victim said two military men also reside in the place — a claim being investigated by the police.

Cebu City officials yesterday appealed to the public to immediately report to the police if they find dangerous items like explosive devices being left behind in public places.

“We would like to inform the public that if you see any explosive device, report it immediately to the police. Dili nila hilabtan (Don’t touch it). Most of the accidents are caused by people who are curious and don’t know how dangerous these items,” he said.

Tumulak said he was informed that the Punta Princesa Police Station personnel are already investigating the incident.

He said authorities should trace if there are personnel from the Armed Forces of the Philippines (AFP) or the Philippine National Police (PNP) living near the area who may have accidentally left it on the ground.

If found responsible, the official may be imposed with administrative sanctions.

Acting Cebu City Mayor Edgardo Labella also called for an investigation on why the rifle grenade which killed Genterone was left in a public place.

“First, we urge the people that if they see suspicious articles like a grenade, they should immediately report to the police. But I think the matter should be investigated also. Why is there such a grenade in a public place?” he said.

He also said that they would look for ways to extend livelihood assistance to Genterone’s wife, who would now have to provide for their four children.