Arrest warrant out vs De Lima, 2 others 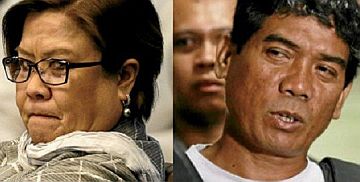 MANILA — A warrant of arrest was issued Thursday by the Muntinlupa Regional Trial Court against Sen. Leila de Lima and two other co-accused, a day before the courts could hear her motions to dismiss the illegal drugs charges against her.

Muntinlupa RTC Branch 204 confirmed that it released an arrest warrant against De Lima at 3:45 p.m. for Criminal Case No. 17-165.

Her other co-accused in the case are her former driver-lover and alleged bagman Ronnie Dayan and Rafael Ragos, former Bureau of Corrections and National Bureau of Investigation deputy director.

Branch 204 Judge Juanita Guerrero issued the warrant a day before the three Muntinlupa RTC branches hear the motions of De Lima to dismiss her cases.

Muntinlupa RTC Branches 204, 205 and 206 are scheduled at 8:30 a.m. Friday to simultaneously hear the motions to quash the charge sheet and to hold the issuance of warrant of arrest against De Lima pending the final resolution of the jurisdiction of the cases.

De Lima insisted that the Office of the Ombudsman had sole jurisdiction to handle her cases, and not the Muntinlupa RTC.

De Lima is facing three counts of violation of the Comprehensive Dangerous Drugs Act, particularly Section 5 (sale) in relation to Section 3 (jj or trading), and Sections 26 (b) and 28. The cases pertaining to her criminal liability as a government official were filed by the Department of Justice.

The cases were based on the complaints by the NBI and watchdog group Volunteers Against Crime and Corruption, which were built on the testimonies of high-profile inmates of the New Bilibid Prison. The inmates, including robbery convict Herbert Colanggo, testified during the House of Representative’s inquiry that De Lima collected drug pay-offs from inmates who were trafficking illegal drugs from Bilibid itself.

The “real battle” begins for De Lima as she will now have the chance to prove herself innocent of the drug charges against her with the issuance of an arrest order against her, Malacañang said on Thursday.

“She should welcome this development herself as she is now given the opportunity to refute any and all allegations and/or evidence to be presented by the prosecution against her,” chief presidential legal counsel Salvador Panelo said in a statement.

“This is where the real battle begins and not in the media that she relishes to use against the President,” he added.

Panelo assured De Lima that the rule of law would prevail.

“The rule of law, as President Duterte keeps on harping every time he has the opportunity, must prevail,” Panelo said. “Unlike when she effected the arrest of former President GMA (Gloria Macapagal-Arroyo) despite the absence of a criminal charge and a warrant of arrest she will now be arrested and detained pursuant to a warrant of arrest issued by a competent court.”/Inquirer.net