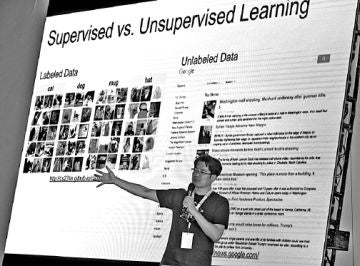 Soonson Kwon, Relation Ecosystem head developer, discusses machine learning during the Google Developers Group coding camp. GDG is one of the organizations working to upgrade the knowledge of local developers and hopes that it will help them in their careers. At right, Joel Yu, Cebu Investment Promotions Center (CIPC) managing director, is also encouraging schools to produce good graduates that can meet the standards set by most companies.
CDN PHOTO/JUNJIE MENDOZA

Schools should ensure that they are producing the best graduates for Cebu’s workforce.

Yu said that most schools in the city produce “good” IT graduates, but most of them are not good enough to meet the standards of most companies.

“The only school in Cebu that is totally satisfactory in their curriculum for IT is UP (University of the Philippines). All big IT companies, even for programming, are very happy with the students coming from the school,” he told Cebu Daily News.

However, he said the state-funded UP Cebu barely produces 50 graduates from its Bachelor of Science in Computer Science program each year.

He said other commercial universities in the city, while producing thousands of qualified IT graduates annually, just do not have the standards that are at par with UP’s.

“UP doesn’t care whether or not they produce many graduates because the school doesn’t depend on tuition. UP can impose very strict standards and they will not care if only 20 students are in a class,” said Yu.

After his past dialogues with members of the academe, Yu said he found out that other schools, which are dependent on fees, could not raise their standards that high because they could not afford to lose students to failure and eventually risk dissolving the class altogether.

“If a student should be marked failed, he should be failed. Some schools are just so lenient,” Yu said.

Professionals in the IT sector remain as the country’s highest-paid employees, a recent JobStreet.com report said.

The need to raise the skill level of IT professionals as well as other IT-BPM workers has been greatly pushed amid the evolving digital business landscape.

Yu said the only way to handle displacement from the workforce is to give the country’s IT workers higher-level skills.

He said that math- and science-oriented curricula should be introduced as early as primary school to ensure that students would want to pursue careers in IT in the future, given how these subjects are the core of IT and programming.

“India has been good at this ever since but not the Philippines. Developing of skills should start at an early age,” Yu said.

“In fact, in the last training, our teachers scored well in the online certification for ISM comparable to their Indian counterparts,” said Sa-a.

Other organizations such as the Google Developers Group (GDG) in Cebu recently held a coding camp last Saturday to teach 1,500 developers, mostly students, about Google technologies.

Shad de la Cruz, GDG community manager, said the government should support programs that enable students to learn on their own and outside the confines of their schools.

“They will not learn if you spoon-feed them. They have to discover things by themselves,” he told CDN at the sidelines of the event.