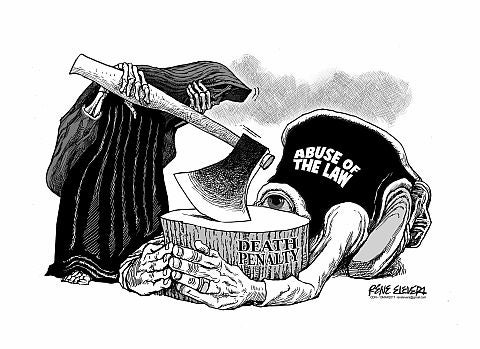 They may have the numbers, but even with the passage of the death penalty bill on third and final reading by the Lower House, the Senate version may serve to further dilute or augment the existing bill — depending on which way they go — before it reaches the President’s office for signing and approval.

But while we speculate how the Senate debates on the bill, which may prove to be more substantial, last Tuesday’s final deliberations by the Lower House only serve to remind us how parochial and vulnerable to opportunism they can be especially when dealt with by the Palace’s top occupants and his/her allies.

Nowhere is this evident than in Rep. Rodrigo Abellanosa of Cebu City’s South District who chose to abstain from voting out of so-called consideration for the sentiments of his constituents whom he claimed were divided on the issue.

Exactly how he gauged those sentiments, no one knows but himself and his patron Cebu City Mayor Tomas Osmeña. Maybe he consulted with top barangay officials, whose opinions would hardly reflect those of the residents living in their areas.

But bluntly put, the only sentiments that appeared to have mattered in Abellanosa’s decision were those of the Catholic Church, which remains a potent force in Cebu’s social political landscape, and the good graces of President Rodrigo Duterte whom he doesn’t want to antagonize with a “no” vote on the bill.

His fellow ally in the Bando Osmeña-Pundok Kauswagan (BO-PK) camp, Rep. Raul del Mar of Cebu City’s North District, stood his ground regardless of the fallout he may receive due to his decision.

The other Cebuano legislators toed the administration line, thus helping ensure the passage of the bill that House Speaker Pantaleon Alvarez guaranteed would be approved within the year.

With Sen. Franklin Drilon demoted and Sen. Leila de Lima incarcerated, the Senate may have an easier time deliberating on the Senate version of the death penalty bill.

Still we can realistically expect better debates and deliberations on the bill from the Senate whose members are elected at large and have perhaps a more grounded view on issues.

But there may be further refinements, like perhaps including rape and plunder among the crimes punishable by death, something which President Rodrigo Duterte told Alvarez to include in the House bill after it was passed last Tuesday.

Whatever the public sentiments are on the bill — and considering the President’s popularity, it’s not hard to imagine that a lot of Filipinos support his hardline stance to impose the death penalty on drug traffickers — there should be exacting provisions that would prevent any abuse of the law.

That is probably the most realistic expectation at this point, but it isn’t wrong to hold out hope that the death penalty bill may not see the light of day. It’s up to those opposing capital punishment to stir up public opinion against it.

Read Next
Water runs dry but not the drug supply