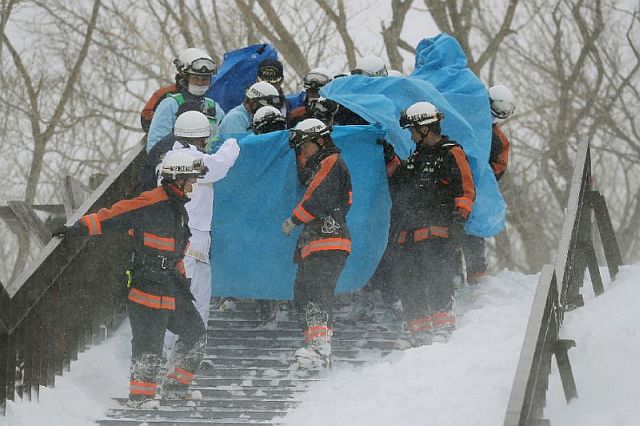 More than 100 troops have been deployed in a massive rescue effort after an avalanche hit Tochigi prefecture in Japan, killing eight students.
/AFP

More than 100 troops have been deployed in a major rescue effort after the avalanche hit ski slopes in Tochigi prefecture, with television footage showing rescuers climbing mountains as ambulances stood by.

A group of 52 students and 11 teachers from seven high schools were on a three-day mountaineering outing when disaster struck, according to authorities.

A warning had been issued for heavy snow and possible avalanches from Sunday until Monday in the area north of Tokyo, with the local weather agency forecasting snowfall of some 30 centimeters.

At least eight students, mostly from Otawara High School in Tochigi, were found with no vital signs, an official with a prefectural disaster task force told AFP.

In Japan, deaths in such circumstances are not announced officially until doctors can confirm them.

More than 30 people have been injured according to news agency Kyodo.

“We still don’t know how many teachers are included among the victims,” an official said.

The avalanche struck in the town of Nasu 120 kilometers north of Tokyo on the final day of the excursion, Tochigi authorities said, adding that soldiers were sent for rescue operations at the request of the prefecture’s governor.

“This is an annual event and we never had a major accident before,” one of the teachers told Jiji Press. “I am really shocked.”

The ski resort had been closed for the season, according to the operator’s website, with the lift stopped and no skiers at the site.

But some of its facilities were made available for the high school mountaineering trip organized by local physical education authorities./AFP