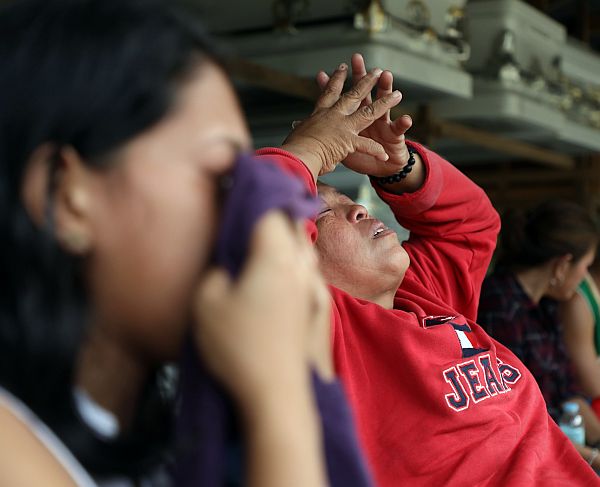 Airees Durano mourns the death of her two-year-old son, Vience Ian, who was swept away by raging floodwaters brought about by tropical depression Crising in Carmen town, northern Cebu just as the storm weakened into a Low Pressure Area (LPA) last Easter Sunday.
CDN PHOTO/TONEE DESPOJO

The unexpected wrath brought about by the otherwise mild tropical depression Crising caught many people by surprise when the floodwaters it brought along slammed through northern Cebu and left nine people dead.

And from here on, the provincial government is not taking any chances.

After personally surveying the damage caused by Crising in the town of Carmen, Cebu Governor Hilario Davide III announced that they would look into relocating the families living in the flooded areas, which he considered as “danger zones”.

The areas are located alongside a creek which leads to Barangay Dawis Norte in Carmen.

According to Davide, the provincial government was mulling the use of a two-hectare property owned by the province located in the northern town.

Earlier, Provincial Board member Miguel Antonio Magpale of the 5th District of which Carmen town is a part of, told reporters that the lot was acquired during the previous administration and was originally intended as a landfill area.

Magpale said the plan to build a landfill did not push through due to the objection of Carmen residents.

No final agreement has yet been reached.

“That is not actually forced evacuation because the plan, which is not yet final, is to relocate the families affected because of the land condition of their location,” said Regner in Cebuano.

PDRRMO has given food assistance to victims of Crising through 325 packs consisting of rice and canned goods distributed in Carmen, 200 packs in Consolacion and 87 packs in Danao City.

Aside from eight casualties in Carmen town and one in Danao City who all were swept away by raging floodwaters, Crising also killed a fisherman in Alcoy who had gone out to sea.

According to Regner, PDRRMO was still in the process of assessing and consolidating all data gathered by the Cebu Province Rapid Assessment Team (CPRAT) pertaining to last week’s storm.