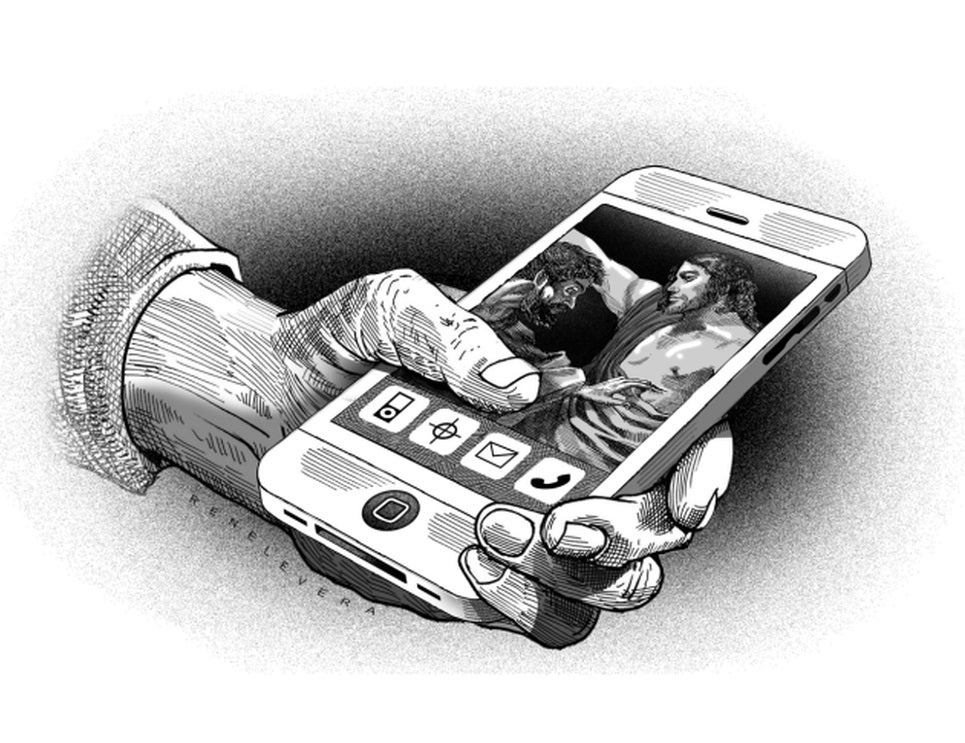 I didn’t know what got into me — I took a shot of my lunch with my phone camera.

It was not because the prandium was great. Why, I only had fried fish, squash stewed in coconut milk, rice and a banana, and — to complete the credits — bottled water.

Perhaps it was the way I arranged the items on the table.

But really, it was because the man and woman who sat on the bench in front of me had their arms around each other, and inasmuch as I like mysteries, I felt like stealing a shot of that ineffable moment.

But, which made me believe that suspicion is instigated by the devil, the man mysteriously turned towards me, and so I just aimed the camera at the food instead.

Which I found no cause to mourn. As it turned out, the shot was classic and possessed of qualities I did not think possible to capture with my simple equipment, given that the food was just an alibi and I had no time to compose the picture.

Still the contrast was sharp, which was to be expected since

I was facing the glare of an April day.

What gave the image a special appeal were the shadows.

They were well-grounded, a term which I accept is redundant. But as the foot is to the shoe, the fish was to its shadow on the white plate, which respectively may be likewise said of the bend of banana and the plateau of rice and the bowl of soup, as well as the spoon and fork, still united by a veil of tissue paper wound around their heads.

As I contemplate the image on my camera phone, the word that came to me was chiaroscuro, the contrast in things of light and dark. This was the favored style of Caravaggio, who painted his subjects as he saw them, warts and all, in a world of light and darkness.

For instance, in his painting, “The Incredulity of St. Thomas,” reportedly his most copied work, Caravaggio portrays Christ baring his body and guiding the hand of a surprised Thomas to touch the wound on his side.

This is a rendering of a scene in the Gospel of John, which narrates an episode in which, eight days after his Resurrection and sudden appearance before his disciples, who for fear of the Jews had holed up behind closed doors, Jesus appeared again, and invited Thomas, who had expressed disbelief in Jesus’ first appearance which he missed, to touch the wounds in his hands and his side, whereupon Thomas declared, “My Lord and my God!”

And Jesus said to him, “Have you believed because you have seen me? Blessed are those who have not seen and yet believe.”

In Caravaggio’s painting, this takes place against a backdrop of darkness, not unusual even on purely physical grounds, on account of the fact that the disciples had gathered inside a locked room with little or no light.

While Caravaggio strove to depict as natural a scene as possible, it was not unusual during his time to locate the brightness in Christ himself.

In a vision of the Nativity, St. Bridget of Sweden saw that the Infant Jesus was itself emitting light. No doubt, because of this, there was a tendency to minimize the use of other light sources.

There is no ostensible source of illumination in Caravaggio’s painting.

In fact, it is surprising how Jesus and Thomas, and two other disciples, appear to bathe in light when there is no lamp or candle or window anywhere near. But somehow we do not consider this a problem.

The Christ that we see in the painting is the risen Christ, who still has the wounds from the nails and the spear, which, while at one time they brought about his death, are now, because Jesus rose from the dead, the proof of death’s defeat.

What can be darker than death? And brighter than the conquest of death? And so Caravaggio has no need of lamps or candles or windows.

The fact of the Resurrection is more than enough light, in fact is Light itself.

Love is, of course, death’s conqueror.

For which reason, after finishing the soup and banana and half of the rice and fish, and as they were about to leave, again—because I am human and not above kitsch—I tried, and thank God, succeeded, to grab a shot of the departing lovers.

Read Next
Show mercy on our common home