Laying a hero to eternal rest 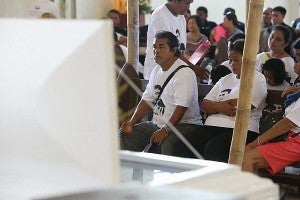 The parents of PO2 Rey Anthony Nazareno take comfort in the fact that their son died a hero, defending the country.
CDN PHOTO Junjie Mendoza

This was how the grieving father of PO2 Rey Anthony Nazareno said goodbye to his son, a member of the Special Weapons and Tactics (SWAT) team who was killed during an encounter with Abu Sayyaf terrorists in Barangay Napo, Inabanga, Bohol.

He was among four government troopers slain during the clash early morning of April 11. The three others were members of the military.

Rey Anthony was laid to rest in a public cemetery in his hometown of Calape, Bohol.

Dominador said he is very proud of his son and knew that the life of Rey Anthony was not put into waste.

“Iyahang kinabuhi wala masayang. Niserbisyo siya alang sa kinabuhi sa uban (His life was not a waste. He served so others may live),” Dominador said.

And for that reason, Dominador did not regret allowing Rey Anthony to enter the police service, even if he died in action.

Hundreds of family members, relatives and friends attended his funeral, wearing white t-shirts printed with “Our Hero, Anthony. Gone but never forgotten” and paid their last respects to him.

His mother, Gaudencia, is comforted by the thought that only three members of the ASG remain at large.

(At least there are only three left. I hope they will be immediately captured because maybe there will be another life that will lost .)

A Mass and eulogy were offered at the San Vicente Ferrer Parish preceded Rey Anthony’s burial at noon yesterday.