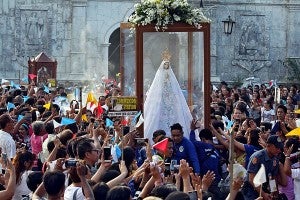 Hundreds of Catholic devotees welcome the arrival of the image of Señor Sto. Niño and the icon of the Blessed Virgin Mary from Lindogon, Simala as they enter the Basilica Minore del Sto. Niño yesterday.
CDN PHOTO/JUNJIE MENDOZA

“BEAR witness to the faith.”

This was the message of Fr. Andres Rivera, prior provincial of the Augustinian Province of the Sto. Niño de Cebu-Philippines, as Cebuanos marked the 452nd anniversary of the discovery of the image of the Child Jesus — the oldest religious icon and the symbol of Catholicism in the country.

“What has become of the Catholic faith we received? Have we put it into practice or does it still remain in the wooden chest of our hearts?” he asked.

At sundown yesterday, hundreds of people gathered at the outdoor Pilgrim Center of the Basilica Minore del Sto. Niño in downtown Cebu City for the main Mass to commemorate the Kaplag or the finding of the Sto. Niño image.

About 20 priests led by Fr. Pacifico “Jun” Nohara, rector of the basilica, concelebrated with Rivera during the 5:30 p.m. Mass.

An hour earlier, devotees welcomed the images of the Sto. Niño and the Our Lady of Lindogon from Simala town in Sibonga, south Cebu.

As part of this year’s Kaplag celebration, a replica of the original image of the Sto. Niño was brought to the Cebu Provincial Detention and Rehabilitation Center (CPDRC) last Monday, and was transferred to the Cebu Metropolitan Cathedral before visiting the San Nicolas Church in Cebu City, and the Marian Shrine in Simala.

On its way home, the image of the Child Jesus was accompanied by the icon of the Blessed Virgin Mary from Lindogon.

In his homily, Fr. Rivera said the image of the Sto. Niño, which was given as baptismal gift by Portuguese explorer Ferdinand Magellan to Cebu’s Queen Juana in 1521, reminds Filipinos of the birth of Christianity in the country.

“In the image of the Child Jesus, we see history and how our forefathers received the Christian faith,” he said.

“But not only that, the image also reminds us of the invisible God who became flesh,” he added.

Fr. Rivera called on the faithful to deepen their faith and not to be contented with popular religiosity.

“Wiping your handkerchiefs on the image of the Sto. Niño is not enough. We need to bear witness to the faith in our daily lives. We need to change ourselves for the better,” he said.

“Are we honest in your dealings with others? Are we serving the community? Remember that faith is not only received. It is shared,” he added.
Winners of Wednesday’s Huniño, an annual original songwriting contest; as well as the Coro del Sto. Niño de Cebu, rendered their pieces during the Mass.

“Kaplag” recalls the discovery of the Sto. Niño icon by Spanish soldier Juan Camus on April 28, 1565 amid the remains of a burnt nipa hut after Spanish forces set the village on fire.

Camus was part of the Spanish expedition led by Miguel Lopez de Legaspi to reclaim the islands after Magellan’s first visit in 1521.
The original image of the Holy Child Jesus is housed in a glass-enclosed marble aedicula beside the main altar of the Basilica Minore del Sto. Niño.