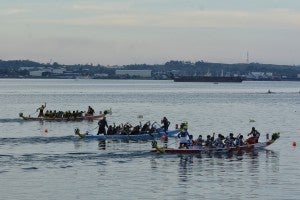 Some of the best dragon boat teams in the country—including three from abroad—showcased their skills in the inaugural Cebu Dragon Boat Fiesta 2017 at the Cebu Yacht Club in Lapu-Lapu City yesterday.

But no team glittered the most than the Philippine Accessibility Disability Services (PADS) PWD Adaptive Team.

The team, composed of persons with disabilities, surprised everyone as it went toe-to-toe with other powerhouse teams for the crown in the 500-meter mixed standard category, which was still ongoing as of press time.

They finished second behind Navy in race 18, clocking two minutes and 32.43 seconds. Navy won that heat with a time of 2:20.60. The fastest team in their respective category will take home the crown.

With that performance, the team has gained a lot of respect.

“We don’t want to be just sitting in the sides and cheer like fans,” PADS CEO and Co-Founder JP Maunes told Cebu Daily News. “We paddle with a goal, with a mission – we want to make an impact.”

Maunes, who also busies himself with other PADS advocacies, has been at the forefront of the team in all the things they try to achieve.

He said he sees the heart and competitive spirit his paddlers put whenever they get on board on their respective boats despite their handicap.

“In Boracay (Boracay International Dragon Boat Festival), I can see my players crying after the race. They put so much emotion and heart in what they do,” said Maunes.

The team failed to snag home a medal in the Boracay race last week but the love and support they got from other teams meant more than the gold medal.

In the Cebu race, people would actually pass by their booth, asking for a photo opportunity. Some would even ask for their jerseys.

“They have all my respect,” Manila based team PDRT Fireblades men’s team captain George Ventayen said on how he observed the team’s performance. “When they play, you can see that they have a very positive outlook in life.”

After the Cebu race, the PADS team will now have their eyes set for the upcoming DBS Marina Regatta in Singapore this June.