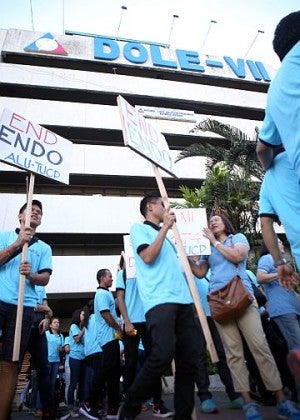 Workers’ groups in Cebu mark Labor Day with a protest rally in front of the office of the Department of Labor and Employment in Central Visayas, calling for an end to work contractualization.
CDN PHOTO/LITO TECSON

Almost one year since President Rodrigo Duterte was elected to the country’s highest public office, workers are still clamoring for the fulfillment of the executive’s campaign promise to end all forms of labor contractualization.

Moderate and militant labor groups in Cebu took to the streets of Cebu City yesterday in separate Labor Day protest-marches, raising the same concern, as well as clamoring for salary increases of at least P500 a month.

Lawyer Jonas Asis, regional vice president of the Associated Labor Union-Trade Union Congress of the Philippines (ALU-TUCP) in Central Visayas, said they still have not seen the change they are calling for despite efforts on their part to meet halfway with the government.

“What we are looking for is the campaign promise to end all forms of contractualization. The President is approaching his first year in office and that has yet to be fulfilled,” he told reporters on Monday, Labor Day.

Close to 2,000 ALU-TUCP members gathered in front of the Department of Labor and Employment in Central Visayas (DOLE-7) office along Gorordo Avenue on Monday morning to call for an end to contractualization or, in Filipino slang, the “endo” (end-of-contract) scheme.

Endo refers to a practice among some companies wherein contracts with workers are routinely ended on the fifth month to avoid having to regularize their employees.

At 7 a.m., the group began to march to Pier 1 in downtown Cebu City where the ALU-TUCP headquarter is located.

The protesting laborers held signboards expressing the group’s dissent to Department Order 174 issued by Labor Secretary Silvestre Bello III, as well as their desire to have House Bill 4444, which seeks to strengthen workers’ security of tenure, be passed into law.

ALU-TUCP also demanded that Bello step down for allowing endo to continue amid uproar from labor groups in the past year. D.O. 174, which the labor department released in March, provides better deals for labor but still does not put an end to endo, as promised by President Duterte in his campaign.

Among the salient features of this issuance was the absolute prohibition on “labor-only” contracting, which refers to “an arrangement where the contractor who supplies workers to a principal does not have substantial capital or investment, and the workers recruited and placed by such person are performing activities which are directly related to the main business operation of the principal.”

Aside from this, the new policy also changed the definition of substantial capital contractors from paid-up capital or net worth of at least P3 million to P5 million.

“D.O. 174 is very frustrating. It is the same animal. It does not bring any change at all. If there is, there is only an increase in capitalization. But from what we know, after contractors show the amount to DOLE for purposes of registration or acquiring license, they withdraw that money,” said Asis.

The labor group also asked for the passage of House Bill 4444 or the Security of Tenure Act, a measure proposed by the TUCP party list “definitely prohibiting and criminalizing contractualization and all forms of fixed-term contracts.”

“Security of tenure is provided in the Labor Code, but HB 4444 seeks to strengthen it and end all forms of contractualization, a move that is in consonance with the campaign promise of the President,” Asis said.

TUCP party list Rep. Raymond Mendoza, author of HB 4444, said he would seek an audience with the President in order to persuade him to certify the bill as “urgent” as well as to convince the President to move for the amendment of Department Order No. 174.

According to DOLE-7, over 3,500 workers in Central Visayas have been regularized between July to December in 2016.

Of the 3,528 workers regularized during the period, 1,714 were working directly under an establishment while 1,788 were engaged with agencies, contractors, or subcontractors and had been regularized by their principals.

In March this year, DOLE-7 announced the creation that would expedite the resolution of labor cases in the region involving prohibited forms of contractualization.

Former DOLE-7 director Exequiel Sarcauga earlier said that they were handling 32 direct-hire and 259 agency-hire cases affecting more than 9,000 workers in the region.

Should the agency be able to resolve these cases and prove that the concerned firms are practicing labor-only contracting, 437 direct-hired and 8,399 agency-hired workers will be regularized.

DOLE-7 Director Elias Cayanong, on the other hand, said they have been promoting voluntary compliance on the part of the employers to D.O. 174 by the end of the year, after which the order will be fully enforced.

According to Cayanong, employers who could not comply with the mandate within the target date could either face cancellation of their business or that a cease and desist order could be issued against them.

In Talisay City, about 1,000 workers and management representatives from four Metro Cebu cities took part in the Labor Day celebration organized by DOLE-7.

Lawyer Maria Gloria Tango, the Labor department’s assistant secretary for Central Visayas, stressed that both the President and Bello are committed to addressing all labor sector’s concerns, embodied in the program ‘AmBisyon Natin 2040’, a long term vision for the Philippines introduced last year by the Duterte administration.

The Eight-Point Labor and Employment Agenda (EPLEA) under the program include continuously enhance and transform DOLE into an efficient, responsive, purposeful, and accountable institution; to address the persistent problems of unemployment and underemployment; to ensure full respect of labor standards and the fundamental principles and rights at work; to continuously strengthen protection and security of our overseas Filipino workers.

The fifth item in EPLEA, according to Secretary Bello, is to bring more focus and accessibility in workers’ protection and welfare programs; to achieve a sound, dynamic, and stable industrial peace with free and democratic participation of workers and employers in policy and decision-making processes; to have a labor dispute resolution system and to have responsive, enabling, and equitable labor policies, laws, and regulation.

Cayanong, meanwhile, stressed Cebu has a better employment outlook as its unemployment rate for the first quarter of 2017 has dropped to 4.6 percent from 5.4 percent over the same period in 2016.

“The trend is we are better compared to other areas in the country even in the national level in which its unemployment rate is at 5.5 to 5.9 percent,” Cayanong told reporters in an interview.

The Partido Manggagawa – Cebu coordinator Dennis Derige yesterday said that like other labor groups in Cebu, they also want the President to fulfill his promise to end contractualization, especially the practice of hiring workers via agencies.

“Our demand today is for the President to draw up an Executive Order in line with the workers’ demand for total prohibition of agency-hiring and fixed-term employment,” Derige said.

Cayanong said that while they cannot stop contractualization, the practice of endo would have to stop since it is prohibited under D.O. 174, which prohibits hiring by a manpower agency (contractor/subcontractor) of a worker under a repeated contract of short duration.

Cayanong said they have 40 pending mandatory conferences in Cebu for companies to implement voluntary compliance to regularize workers.

“This is part of the process in ending endo. If companies will not voluntarily comply, then we will release a compliance order until they will voluntarily (regularize) their employees,” Cayanong added.

As of yesterday, DOLE-7 was still doing an inventory on how many workers in Cebu have been voluntarily regularized, he said./with CORRESPONDENTS IZOBELLE T. PULGO AND MICHELLE JOY PADAYHAG

Read Next
Advocates hope Cebu LGUs will adopt these measures