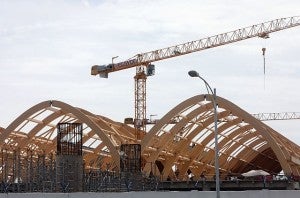 Once completed in 2018, the new terminal of the Mactan- Cebu International Airport will increase more tourists in Cebu and Lapu-Lapu City.
CDN FILE PHOTO

The influx of tourists in Lapu-Lapu City brought about by new commercial developments is foreseen to change the city’s real estate landscape in the next few years.

“I expect an influx of tourists in the years to come because we have something new to offer to the tourists who look for something different during their visit,” Mendoza told Cebu Daily News.

Mendoza was referring to the construction of a $341-million integrated resort and casino in Barangay Punta Engaño.

According to Pagcor, this would be Udenna’s first-ever integrated resort casino outside Luzon.

To be called Lapu-Lapu Leisure Mactan, the project will rise on a 12.5-hectare prime beachfront located six kilometers away from the Mactan-Cebu International Airport, with views of the Hilutungan Channel to the south and Magellan Bay to the north.

Lapu-Lapu Leisure Mactan is set to operate in 2019 with projected completion in 2022.

Dennis Uy, Udenna president and chief executive officer, said they are very bullish on the tourism and hospitality prospects in the Philippines and that it was high time to invest in tourism and gaming.

He added that there would be better employment opportunities for locals as they intend to open at least 800 jobs across two phases.

Mendoza said that with this development, not only does he expect more visitors to come to the city but also the rise of more residential buildings particularly apartelles.

“Small businessmen, even outside the hotel and resort industry, would think about how they can take advantage of this tourism boom. These resorts and hotels being built in the city will need employees. These employees will need somewhere to stay,” he explained.

Aside from employees, these businessmen could also target managers or department heads, Mendoza added.

He said that condominium unit owners in Lapu-Lapu City have rented out their properties via Airbnb to cater to the growing tourist market.

Families have also began leasing their townhouses, up to four bedrooms, with swimming pools and other facilities to tourists for at least P20,000 per day, said Mendoza.

For the government official, the upcoming resort and casino as well as other developments in the city are expected to draw in more tourists and spur economic development.

“It is a welcome development for Lapu-Lapu, not only in terms of the economy and employment but also is a big boost for the tourism sector,” Mendoza pointed out.

The MCIA expansion project is also expected to boost tourist arrivals not only in Lapu-Lapu but in Cebu as a whole.

MCIA’s second terminal, which is set to be operational by June 2018, is poised to bring the airport’s capacity from 4.5 million to 12.5 million.

“We need to collaborate with the MCIA and GMCAC (GMR-Megawide Cebu Airport Corporation, the private operator of the MCIA) regarding their plans. It is possible that they are so aggressive in promoting Cebu that we won’t be able to supply the demand for rooms,” he said.

At present, Mendoza said Lapu-Lapu has an inventory of about 5,000 rooms per night, while the cities of Cebu and Mandaue in the mainland can easily provide up to 10,000 rooms.

There are around 80 hotels and resorts in Lapu-Lapu City, Mendoza said.

Consultancy firm Colliers International, in a statement last month, said the P17.5-billion public-private partnership should entice more airlines to mount direct flights to Cebu, which has been consistently ranked as one of the most visited destinations in the country.

“Cebu’s rising attractiveness as a tourist spot and growing competitiveness as an investment destination should support a 15 to 20 percent growth in tourist arrivals in the next 12 months,” Colliers’ Cebu General Manager Gerard Padriaga said.

Data from the Department of Tourism in Central Visayas (DOT-7) showed that Cebu welcomed 3.46 million domestic and foreign tourists from January to November in 2016, rising 12 percent year-on-year.

Of this figure, 966,727 or 59 percent were registered in Lapu-Lapu City, with major markets being Korea, Japan, China, the US and Australia.

“It’s normal because of the opportunities the city can offer. We have employment and at the same time, we have housing. But it needs to be balanced because our thrust is still tourism,” she said.

Amar said she is proposing a moratorium on the approval of subdivision developments in the city before the area gets too saturated.

She said the infrastructure has been outpaced by development that it threatens to create problems on traffic, flooding and solid waste management, among others.

Lapu-Lapu City has a total land area of 6,424 hectares, 20 percent of which Amar said was intended for tourism development.

A huge chunk of the city government’s Internal Revenue Allotment of P150 million for this year is also earmarked for development projects in the area of tourism.

The city government recently endorsed a resolution to the Department of Public Works and Highways (DPWH) asking the agency to reconsider for funding a road-widening project in Lapu-Lapu City.

Around P17 billion was estimated to be spent on the widening of local roads including the Punta Engaño Road, the Mactan aviation Road and the section from Marigondon to Plantation Bay, said Amar.

“Since our thrust for the city is tourism development, we want to improve the roads leading to tourism destinations,” Amar added.

Lapu-Lapu City is located on Mactan Island, where the town of Cordova is also located. The city is also connected to Cebu mainland via two bridges — the Marcelo Fernan Bridge and the Mactan-Mandaue Bridge.

Aside from hosting several hotels and resorts, the first-income class city is also home to export processing zones.