Ecleo to surrender but sets conditions 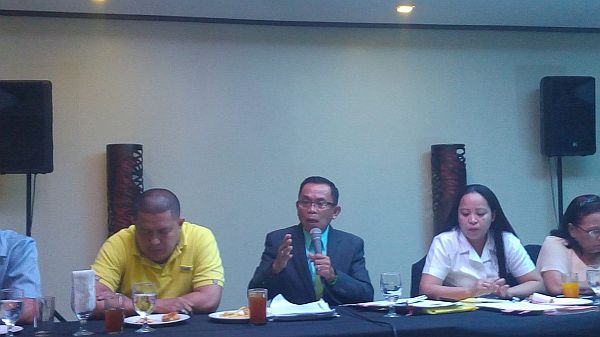 Senior Insp. Atilano Fabella (center), a retired policeman and member of the Philippine Benevolent Missionaries Association (PBMA), lashed out at lawyers Orlando Salatandre Jr. and Giovanni Mata for allegedly mishandling the parricide case against their cult leader Ruben Ecleo Jr. in a press conference at the Westown Lagoon in Mandaue City. With him were other members of the PBMA. (PHOTO/ADOR MAYOL)

His two former lawyers—Orlando Salatandre Jr. and Giovanni Mata—must be stripped of their license to practice law, and that the Supreme Court shall reopen the parricide case against him.

These were the conditions echoed by Senior Insp. Atilano Fabella, a retired policeman and member of the Philippine Benevolent Missionaries Association (PBMA), in a press conference at the Westown Lagoon in Mandaue City on Wednesday.

“Nandito lang siya (Ecleo) sa Pilipinas, at haharapin niya ang anumang mangyayari basta’t madisbar ang dalawang abogado at ma-reopen ang kaso niya. (He is just in the Philippines, and he will face whatever happens as long as his two lawyers will be disbarred, and his case will be reopened),” he said, accompanied by about 30 PBMA members.

Fabella did not elaborate on Ecleo’s whereabouts, saying he is only communicating with the fugitive’s 32-year-old son, Ruben Madron Ecleo I.

But Fabella and the PBMA won’t likely get what they wish for.

The Integrated Bar of the Philippines (IBP) has dismissed all the three disbarment cases Fabella filed against Salatandre and Mata for lack of merit.

In one case, the IBP considered Fabella a “fanatic member” of PBMA and a “law graduate who has not passed the Bar exams, the reason why he prosecuted complaint by himself.”

Fabella has filed motion for reconsiderations to contest the IBP’s ruling.

In 2014, he filed disbarment complaints against Salatandre and Mata for allegedly mishandling the case which led to the conviction of Ecleo.

He said Salatandre and Mata did not do their best to question the identity of the cadaver believed to Ecleo’s wife Alona, a fourth year medical student, who the accused allegedly strangled inside their home at Sitio Banawa, Barangay Guadalupe, Cebu City on Jan. 5, 2002.

Three days later, a woman’s body was found inside a black garbage bag dumped in a ravine in Dalaguete town, southern Cebu.

Fabella said Salatandre and Mata reportedly got P250,000 from the Ecleo family as fee for every court appearance during the first five years, and P150,000 every hearing in the succeeding five years.

Apart from the lawyers’ fee, Fabella said Salatandre and Mata also collected P26 million from PBMA members while making a promise that the PBMA supreme master will be cleared of the charges.

Asked if where Alona could be at now if the dead body found in Dalaguete is not hers, Fabella said “The case filed against Ruben Ecleo is parricide, not kidnapping.”

“Had it been a kidnapping case, we will look for her,” he added.

Sought for comment, Salatandre denied the accusations levelled against him by Fabella and other PBMA members, saying he did his best so that Ecleo will be acquitted.

“Yes, the dead body was never proven to be Alona. The identity of the cadaver was never established amid the fact that identity of the body is an important element of the case. But what can we do? The court still convicted him (Ecleo). We presented complete evidence but the judge just did not appreciate them,” he told the Inquirer over the phone.

Salatandre, who handled Ecleo’s case for 10 years, said he simply performed what was expected of him as a lawyer.

“I was merely doing my job. I’ve been in this profession for 32 years now, and I mean business in every case that I handle,” he said.

Salatandre denied having received P250,000 from Ecleo for every court appearance for the case’s first five years, and P150,000 in the next five years. He also rebuffed accusations that he collected P26 million from PBMA members.

“Accusing a person of a wrongdoing is easy, but proving it is difficult. What evidence they have to prove the accusations against me? Those are but mere assumptions,” he said.

Salatandre refused to reveal the actual amount he received from Ecleo, saying it is confidential.

He said he was nonetheless thankful to the IBP for dismissing the disbarment charges filed by Fabella against him.

In April 2012, Judge Soliver Peras of Regional Trial Court Branch 10 pronounced Ecleo guilty of parricide for killing his wife Alona. The accused was sentenced to reclusion perpetua or at least 30 years imprisonment, and was also ordered to pay the heirs of his wife P25.65 million in damages and attorney’s fees.

The case was elevated before the Court of Appeals.

Ecleo has been a fugitive since an arrest warrant was issued against him in 2011 after he skipped three scheduled hearings in Cebu.

A nationwide manhunt for Ecleo is ongoing. In August 2012, then President Benigno Aquino III offered a P2 million reward to anyone who can give information that can lead to Ecleo’s arrest.