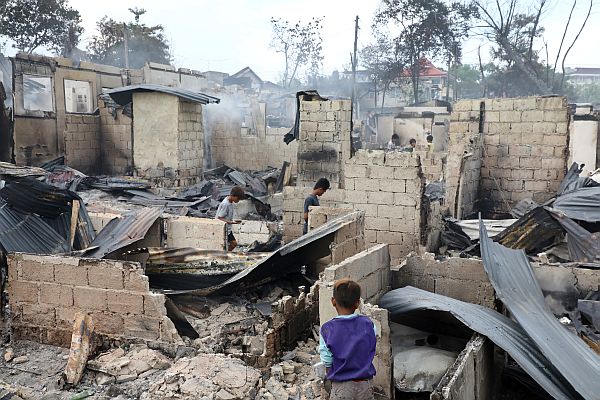 ASHES AND RUBBLE. These boys sift through the rubble of their and their neighbors’ homes in Barangay Pusok, Lapu-Lapu City, razed by a predawn fire on Sunday, May 21, 2017, in the hopes of finding items they can salvage.
CDN PHOTO/TONEE DESPOJO

For 12 years, Buenaventura Obatay worked his heart out as a security guard to earn money for his family.

All the fruits of his labor, except for the few clothes he and his family wore, instantly vanished from their sight following a fire that devoured at least 33 houses in Sitio Kamanggahan, Barangay Labangon, in Cebu City past 1 a.m. on Sunday.

(It is extremely difficult to be a victim of fire. We could hardly explain what we feel. I’d rather be a victim of a typhoon because your things would simply get wet. Fire, on the contrary, takes away all your properties.)

About an hour later, at past 2 a.m., another fire engulfed a densely populated community in Sitio UPA Matumbo, Barangay Pusok, Lapu-Lapu City, leaving about 1,500 persons from around 300 families homeless after some 130 houses were razed to the ground.

At least 1,745 individuals from 359 families were displaced by the two dawn fires, including the 245 persons from 59 families affected in the Labangon fire. Of those displaced in the Pusok fire, around 350 were children ages 12 and below.

Also among those affected by the Labangon fire were 44 blind persons who were undergoing skills training at the Department of Social Welfare and Development in Central Visayas (DSWD-7) in the area.

Fortunately, no one perished in the two fire incidents.

“Nagpasalamat mi sa Ginoo nga walay namatay sa sunog. Sige na lang na ang mga gamit, makit-an ra na (We are grateful to God that no one died during the fire. It would not matter now that we lost our belongings since we could always earn money to gain them back),” Obatay said.

Obatay, his wife and 11 relatives were sound asleep inside their house when he was awakened by what seemed to be smoke coming from the windows.

“Morag naay nihunghung nako nga naay aso. Ug tuod man, paglili nako sa among bintana, dihay gyuy aso. Nagtuo ko nga naa gyuy Ginoo (It felt like someone whispered to me that there was a smoke. And true enough, when I peeped through our window, there really was smoke from the outside. I believe God woke us up),” the 32-year-old Obatay said.

The Labangon fire, which was reported to the Cebu City Fire Department (CCFD) at 1:28 a.m., had gutted 33 houses mostly made of light materials before it was placed under control by firemen at 2:02 a.m., said Senior Fire Officer 2 Ramon Molina of the CCFD.

Molina said investigators have yet to determine the cause of the fire that started at the rented room of blind couple Dario and Joy Cabugngan.

Justina Estrada, the owner of the rented room, said she overheard Dario having a heated argument with another person inside his room shortly before the fire broke out.

Dario, she said, was seen having a drinking session with friends while his wife was away visiting relatives in Lapu-Lapu City.

“Ambot lang kon kinsay iyang (Dario) nakalalis sulod sa kuwarto. Basta human ato, niulbo ang sunog (We don’t know who Dario had an argument with inside the room. What we know is that the fire broke out after the verbal tussle),” Estrada told CDN.

She said Dario, a native of Bohol who finished the skills training program of the DSWD in Labangon, has not returned to the place since then.

She said Joy’s relative was also a victim of the fire that broke out in Lapu-Lapu City on Sunday dawn.

Estrada said they have no intention to file a criminal complaint against Dario, who was her tenant for about 10 years, saying she would rather use her money to rebuild her house instead of using it on legal fees.

Food packs were meanwhile distributed by the Department of Social Welfare and Services to the affected families who chose to stay along the road near their burned houses, except for the blind persons who were housed at the DSWD-7 office located in the same barangay.

“It’s their choice (to stay along the road). Most fire victims wanted to stay near the burned area so that they can rebuild in the same spot and also, it’s because they want to salvage their belongings,” said Cebu City Disaster Risk Reduction and Management Office head Nagiel Bañacia.

He said the fire victims have been told that they could stay at the old barangay hall of Labangon should they wish to stay in an evacuation center.

The houses that were burned in Barangay Labangon were located in a private land that the owner had already intended to sell to the occupants on installment even before the fire broke out, Estrada said.

But Bañacia said he was not sure if all of the fire victims could return to the lots they occupied as they were still negotiating with the landowner if they could rebuild.

He said the victims had a meeting with the private owner yesterday afternoon. And although it has not yet been decided if they can rebuild in the same area, Bañacia said the owner initially wanted to have the fire site reblocked.

Although it is located near the road, authorities noted that the houses in the area were built too close to each other, which was also one of the reasons why the fire quickly spread to other houses.

Bañacia said the city is willing to help the landowner and the fire victims in reblocking the fire site after their ongoing negotiations for the area.

In Lapu-Lapu City, the 1,500 individuals from 300 families displaced by the fire are temporarily housed at the Pusok National High School and are provided with meals, medicines and other basic services by personnel from DSWD-7.

The Lapu-Lapu City Fire Department received the alarm at 2:40 a.m., but the fire was not placed under control until 4:58 a.m. because firefighters had difficulty negotiating through the small alleys of the affected area. It was already at 7:30 a.m. when the blaze was completely put out.

Senior Fire Officer 1 Climaco Salisid of the Lapu-Lapu City Fire Central District said their initial investigation pointed to an unattended lighted candled at the second floor of the house owned by Francisca Nacional as the cause of the fire.

Neighbor Edgar Degit said the Nacional household often had their electricity disconnected due to unpaid bills and had been using candles and kerosene lamps to light their house at night.

One of Nacional’s three children, a minor, was initially reported to be missing but was eventually found by residents.

At least four individuals sustained minor burns on the body but were immediately treated by the medical personnel of the Philippine Red Cross.
The houses that were burned in Barangay Pusok, Lapu-Lapu City, were also built on a private land now owned by a bank.

Degit said the settlers earlier formed an urban poor association and paid P500 per month to the former owner of the lot. However, they failed to settle their monthly dues, prompting a bank to acquire the property in 2015.

Degit said the bank had given them only up to this year to vacate the place, and he believed it was no longer likely that they could rebuild their houses in the same lot.