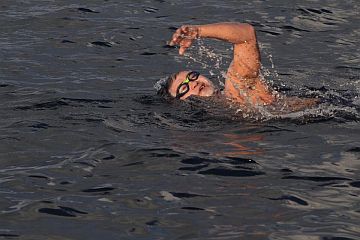 Macarine braves the strong current in the seas off Misamis Oriental for his open-water swim to promote peace in Marawi./ CONTRIBUTED PHOTO

WHAT supposed to be an easy swim for peace in Marawi turned out to be one of the most challenging for Ingemar “Pinoy Aquaman” Macarine.

The 39-year-old Macarine was supposed to swim yesterday from Camiguin Island to the port of Balingoan town in Misamis Oriental in northern Mindanao, which had a distance of 11 kilometers.

But because of the strong current, Macarine, who was born and raised in Surigao del Norte but now based in Bohol, ended in Calamcam Beach in the Municipality of Talisayan, 24-kilometers east of Balingoan.

He swam a total of 23.51 kilometers and finished it in seven hours and 47 minutes.

It was the 28th successful open-water swim for Macarine, which he did just a month after he crossed the Hudson River in New York, USA.