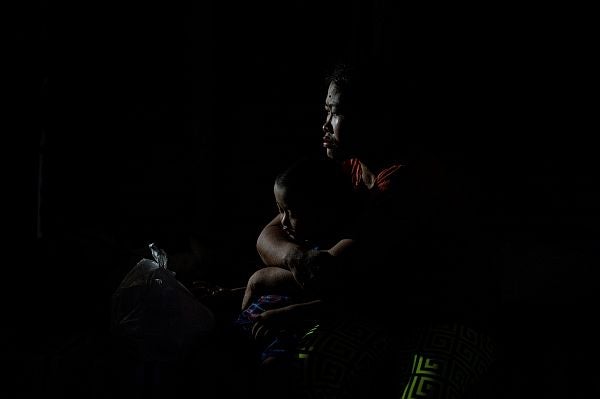 This June 8, 2017 photo shows Evacuee Emmalyn Yorong, 37, and her son Junardo hiding in a room of a friend’s house in Baloi, on the southern island of Mindanao. “Ma please feed me. Please ma, I am so hungry,” three-year-old Junardo’s tone of voice that day wasn’t any more of a typical entreaty to his mother but more like a sound of desperation./AFP

MARAWI CITY, Lanao del Sur – The military’s attempt to push into the city’s villages of Bangolo, Marinaut and Lilod – in an attempt to secure the raising of the flag at Campo Ranao and at the city hall on Monday – suffered a series of setbacks with government troopers getting killed and wounded since Thursday.

On Friday alone, 13 Marines were confirmed killed, according to Lt. Col. Jo-ar Herrera, the spokesperson of the 1st Infantry Division.

He said Marines were moving into Barangay (village) Mapandi in the conduct of clearing operations when they clashed with about 30 Maute and Abu Sayyaf gunmen on Friday.

He said the “enemies” set off improvised explosive devices, fired rocket-propelled grenades and B-40 projectiles on the advancing troops and killed 13 Marines.

A military official said that the encounter between the government forces and the terrorists lasted for 14 hours.

“Initial reports indicate that the fierce firefight ensued when the Marines assaulted the reported enemy position at around 3:30 a.m. and firefight continued up to around 5 p.m. of the same day,” Armed Forces public affairs chief Col. Edgard Arevalo said.

The firefight left the massive number of casualties in a single day. The Marawi City fighting is now on its 19th day.

The latest figure raised the military’s death toll to 58 since May 23, while the number of wounded troopers was still being consolidated as clashes continued as of Saturday, Herrera said.

Saturday’s clash was brought about by the military’s further attempt to push into the village of Bangolo. Troops were met with heavy resistance from the combined Maute and Abu Sayyaf groups, with firefight lasting for two hours starting 6 a.m.

Wayward bullets fired by the extremists even found their way near the Lanao del Sur provincial capitol, which is about 30 minutes by foot from Bangolo.

The air strikes that were being conducted appeared to have not diminished the fighting capability of the extremists – 18 days since the clashes started.

Herrera acknowledged that the “enemies” continue to put up resistance against advancing troops even as bombs and howitzers rained on the villages they had been holding.

But he said despite the resistance, “our soldiers continue to gain more foothold into the inner areas of the city” and were now in Barangay Mapandi, site of Friday’s heavy clash.

Read Next
Firearms, explosives seized during arrest of Farhana Maute