The Wider We Go 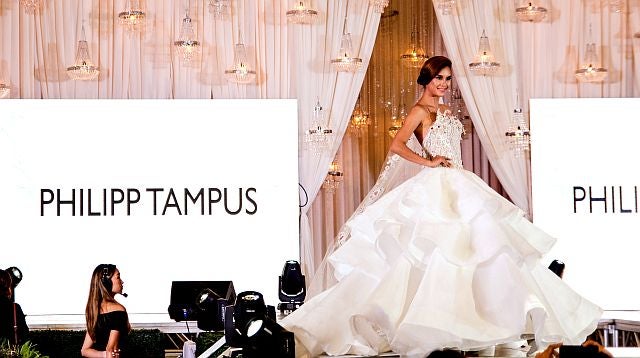 THE HUMOR about hiding a battalion of family members under an ultra extended circumference of the skirt could be true here. It was in the exaggeration rendition of the bouffant cut of Philipp Tampus that harnessed him high up to superstardom in his latest runway series. Had he not been in fashion, he would have been a showbiz power broker.

He’s a master performer—the Madonna of this year’s featured designers.

Even in a throng of the supremes—including those who traveled in from Manila (Randy Ortiz, Rajo Laurel, Francis Libiran)—his was the most striking during the “Something Blu” bridal fashion show over the weekend, June 10, at the Mountain Wing of SM Seaside.

Focus remained on the details, with tiered panels shown layered with a heavy use of ruffled hemming lending the traditional motifs a still softness.
As if mining Georgia O’Keeffe’s works, Tampus brought his currency of Arabesque to archetypal items: floral cutouts over a crisscross of embroidery felt right paired back to elevated haute couture 2017.

All the structured treatments went just right for the stage set, composed of softly pleated drapes with over a dozen of suspended chandeliers and crystal curtains. 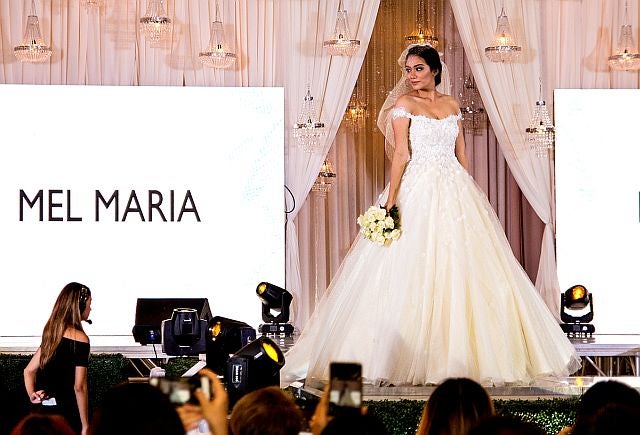 If a design professor critiques the view point of the creator by singling the subject out and shading the borders to create a shadow silhouette to assess the proportions, Tampus would pass with flying colors—the way Mel Maria has perfected another form of the bouffant. Maria’s strength dwelled in the crossroads among the technique of cutting the bodice down, planning out the cascade of scallop appliqués on the off-the-shoulder neckline, and culminating it with the right length of the hem. Ortiz, on the other hand, arranged almost the same, but he orchestrated the details with contrasting white and rust—a mimicry of fall leaves.

Laurel took advantage of texture. The skirt he layered with tulle, yes, but he contrasted it with a horizontal distressed top, a pair of set-in long sleeves (Rica Peralejo wore a short sleeve version, too, to her wedding).

Oversized width on the flare of the bottom section of the serpentine had also stormed the show. It is crucial. Of all the fashion patterns, the serpentine mirrors the truest, most natural shape of a woman. 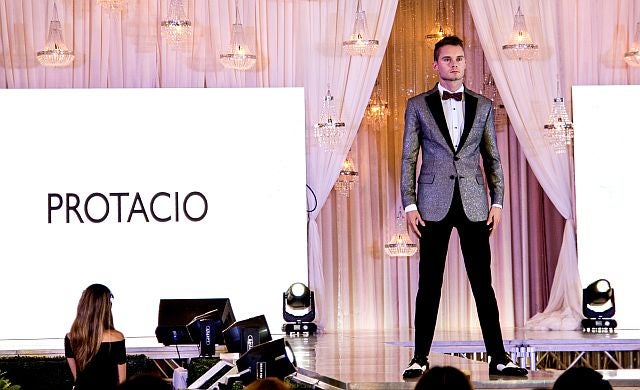 PROTACIO. The combination of the burgundy bow tie against the metallic gray suit is a quirky mixture of texture and colors.

Notice the repetition of curves that aligns the head, bust, hips, and knees. Only a very skillful designer knows how to fill in the negative spaces. In the case of Jun Escario, his version skimmed smoothly on the body—the fulfillment of its philosophical composition, almost a scientific equation —while Libiran offered flounce with matching long, floor-sweeping ruffled trail.

The notion of the “forever” dress—that precious, fashion keepsake—has been coming through on the runways of Paris lately, and these designers
addressed it locally in their own way, via a romantic dress, mostly made from English silk taffeta with a rarefied, Marie Antoinette-like hand. The signature, ’70s-inspired bell-bottoms are still in rotation through different skirt versions, too, though they weren’t the only voluminous
in the mix.

The new bride on the block has both the sleek and exaggerated look that are poised to make a big impression on the style circuit and beyond even if the uninvited could fit under these big skirts… why not?