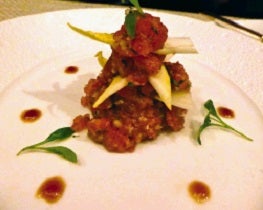 NEW York City is home to many of the world’s celebrated restaurants.

At the top that currently ranks 24 in the world’s 50 Best Restaurants list is an elite French seafood restaurant, Le Bernardin, whose tradition of excellence and innovation started in Brittany in 1972 by sibling duo Maguy and Gilbert Le Coze.

When it finally opened in New York City in 1986, it received two Michelin stars.

With the unexpected passing of Chef Gilbert, Maguy le Coze began working closely with Chef Eric Ripert who took over the kitchen to continue preparing the freshest seafood with the simple philosophy that fish is the star of the plate.

New York Times gave it four stars (the highest) shortly after its opening. It received its third Michelin star in 2005, one of only eight restaurants in the city with three Michelin stars. In 2015, Zagat rated it as New York City’s Top Restaurant for food and service.

I consider myself extremely lucky to be wined and dined by fashion stylist Marlon Corvera who, I must say, moves within the exclusive circle of top chefs and celebrities in New York City.

Yes, he styles some of them. He took my daughter Patricia under his wing as a fledgling model and we have remained good friends. My visits to this unbelievably exciting city are always highlighted by exquisite dinners with Marlon. 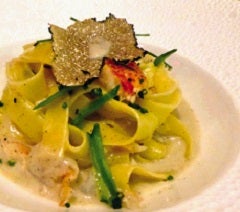 A fish and seafood gourmet, Marlon has been bragging about Le Bernardin (pronounced ber-na-dan).

We finally made the dinner happen one rainy Saturday in Spring.

We were seated at the lounge with a prominent bar on one side, a more casual area adjacent to the elegant main dining room.

As soon as we took our seats, Louis Roederer Brut Premier was poured into flutes as Marlon, who is well known to the service staff, whispered his orders to the dark-suited maître d’.

For openers, a plate of dainty appetizers was served–Salmon Tartare, Fluke Sliver with Sweet and Sour Plum, Grapefruit-Tea Nage and Lobster Causa.

Fluke is also known as flounder, depending on whether the eyes are right or left side up. Fluke is called “dapa” back home and are bottom dweller fishes. Nage is flavored broth used for poaching delicate seafoods.

According to the food attendant, Lobster Causa is a Peruvian inspired dish with potato.

I relished each appetizer as the freshness and flavors had a feast in my mouth. Le Bernardin Salmon Rillettes followed, served with thinly sliced and toasted sour dough baguette.

The appetizer will make anyone reel with delight–fresh salmon is gently poached in white wine with shallots, minced and mixed with diced smoked salmon, light dressing of mayonnaise, lemon juice, chives, salt and pepper.

I had several pieces of baguettes heaping with the rillettes. My attention was undivided when the food attendant served the entrée of Seafood Truffle Pasta with Crab, Lobster Tagliatelle and ceremoniously poured the Black Truffle Emulsion on the pasta dish. Every bite was divine! 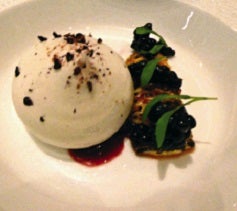 The generous morsels of seafood were sweet and bursting with freshness. Marlon had one of his favorites, Asian Tuna Tartare with Belgian Endives–layers of thinly pounded yellow fin tuna, foie gras, and virgin olive oil with bitter spears of endives.

A ruby red Grapefruit Sorbet, Blood Orange-Quince Granite washed our palates before we had dessert. Quince is a pome fruit like pear but best eaten cooked.