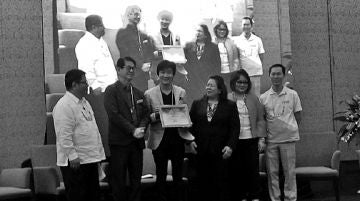 TAKING BUSINESS TO NEXT LEVEL

Cebu’s innate creativity, when paired with science and technology (S&T), is expected to take business in the province to the next level.

Renowned furniture designer Kenneth Cobonpue, the region’s newest science and technology ambassador, said this as he stressed that the future of the industry would lie in the fusion between S&T and creativity.

“In terms of creativity, we are already there. It is just the S&T that we are missing,” said Cobonpue on the sidelines of the Department of Science and Technology Central Visayas’ (DOST-7) Technology Transfer Day on Tuesday at the Waterfront Cebu City Hotel and Casino.

Tuesday’s activity was the first of its kind in Central Visayas, which is part of the weeklong celebration of the regional science and technology week and aims to showcase products and services of scientists and researches that seek to improve the life of every Filipino.

Technology transfer is defined as the “transfer” of technology developed by the government sector to be used by private businesses.

The event is also aligned with Cebu Chamber of Commerce and Industry’s (CCCI) Cebu Business Month 2017 celebration, which carries the theme “STEP UP Cebu: stepping up technology, entrepreneurship, and productivity for the upliftment of Cebu.”

Various agencies of the DOST exhibited their products during the event including innovations in agriculture, food, and transportation such as stabilized brown rice, mango flakes, DOST Tablea, and the hybrid electric road train, among others.

Cobonpue said that even in the creative industry, every new design is a “new technology” or a new way of doing things.

He said the government, through the DOST, has a lot of innovations that the private sector can adopt, which many are not even aware of.
“We can partner with the government and adopt these technologies in our business,” he said.

He cited China as an example of a successful country because even though wages there are higher compared to those in the Philippines, Chinese manufacturers can come up with products at a lower cost through innovative technology.

“With us, we are still mostly doing manual labor. With science and technology, and because we have the creativity already, we will go farther,” he added.

The designer, who sits as vice president of Interior Crafts of the Islands, Inc., is an adopter of DOST-made technologies himself.

A lot of what he does in his own enterprise has to do with technology, especially in the invention of new materials.

He said they have machines from the DOST that “hit the furniture” continuously for a month until they see the point where it breaks.

CCCI president Melanie Ng, for her part, said setting a direction in the midst of a volatile environment is a challenge for every entrepreneur.

Ng said the event would be an avenue for local businesses to step up their game and be at par with the mainstream market, adding that revolutionizing Filipino-generated technologies are a source of opportunities industries can tap.

The Philippines has produced some of the world’s most successful entrepreneurs, with 14 Filipinos already making it to Forbes’ list of billionaires.

As the country pushes to commercialize innovations and inventions, Ng said there is a possibility that more billionaires can be produced.

“This is a good number since in business, it is only 10 percent that gets commercialized,” she said.

To date, the DOST has allocated 10 percent of its research and development funds for technology transfer.

Guevara said that the agency now strives to focus on newly identified priority sectors such as the creative industry and artificial intelligence (AI).

Citing a report from the International Labor Organization (ILO), the official said that if the Philippines does not invest in AI today, the country will lose 89 percent of its call center jobs in the next decade.

The same goes for manufacturing if automation and robotics are not in place by then, the sector stands to lose 49 percent of its workforce.

Among the initiatives of the agency is the Small Enterprise Technology Upgrading Program (SETUP), which provides technological interventions to small enterprises in the form of consultations, provision of innovative and cost-effective facilities, manpower development, as well as consultancy work to address technology needs and limitations to improve productivity and efficiency.