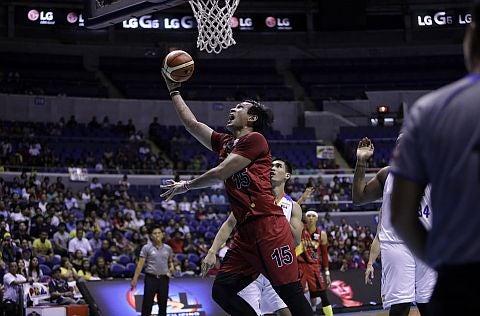 Cebuano June Mar Fajardo of San Miguel goes for a layup against Troy Rosario of TNT in Game 2 of the PBA Commissioner’s Cup Finals.
pba images

San Miguel Beer bucked a slow start to come away with a 102-88 victory over the TNT KaTropa in Game 2 of the PBA Commissioner’s Cup Finals at the Araneta Coliseum yesterday.

Chris Ross put up a superb all-around performance, finishing with 20 points, 9 assists, 5 rebounds and 4 steals for San Miguel, which actually allowed TNT to start the game with a 17-0 blast.

But Ross and the rest of the Beermen kept their composure and recovered in the next two quarters to put the game away and tie the best-of-seven series at 1-1.

“We just had to settle down [at the start of the game] and try not to commit turnovers,” Ross, who was the Player of the Game, said. “We knew we would be able to make shots if we just didn’t commit turnovers.”

When the Beermen got their game going, they slowly chipped away on TNT’s lead with Arwind Santos leading the way with his three triples in the first quarter.

San Miguel eventually took the lead in the second quarter after a 12-0 run and held a 52-43 advantage at the half.

The third quarter was where the Beermen pulled away, starting the period with a 20-6 blast to take a 72-49 lead.

It was also during this stretch that TNT lost Game 1 hero, Cebuano RR Pogoy, who was ejected for committing a flagrant foul penalty 2 on Santos.

San Miguel’s adjustments on defense forced Pogoy, who scored 27 points in a 104-102 TNT victory in Game 1, to go scoreless in the game.

Aside from Pogoy, former San Miguel guard RR Garcia was also limited to just 3 points after scoring 13 in Game 1.

The Beermen also did a good job double-teaming bulky TNT import Joshua Smith this time. Although he did score 11, he had to work hard for every

The Beermen used Gabby Espinas and David Semerad to help out on defense, a move that caught TNT’s offense off guard.

While TNT bled for its points, San Miguel had a field day on offense, building leads of as many as 32 points in the fourth.

Read Next
Cebuano Pantino ousted in quarterfinal round