Ex-cop with ties to Jaguar nabbed by PDEA 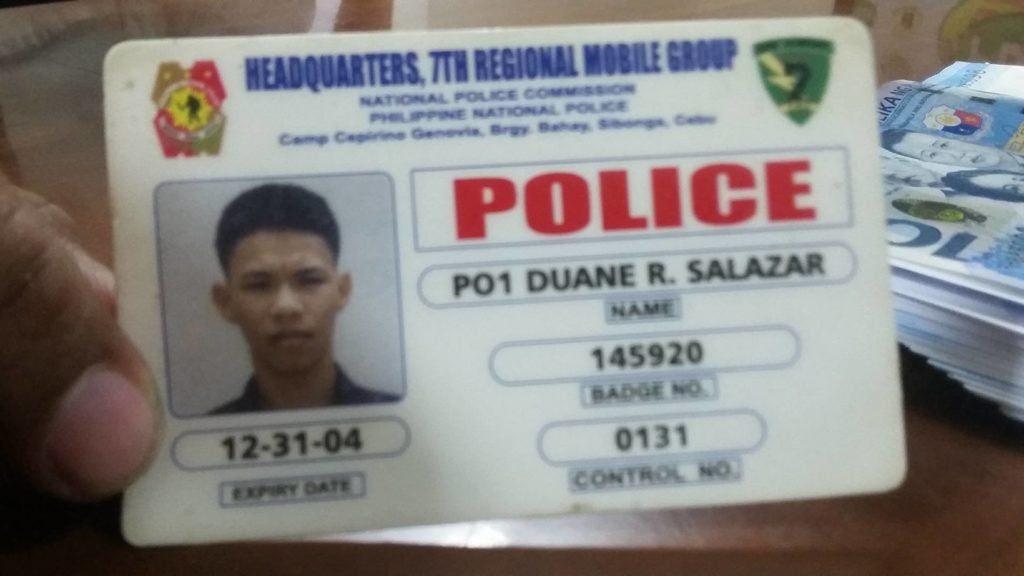 Former police PO1 Duane Salazar’s police ID and the items that were seized from him by PDEA when he was arrested in a buy bust operation in Salvador, Barangay Labangon, Cebu City. (CDN Photo/ Lito Tecson)

A FORMER police officer who was supposedly the hitman of slain drug lord Jeffrey “Jaguar” Diaz was arrested by operatives of the regional Phillipine Drug Enforcement Agency (PDEA-7) at Salvador Street, Barangay Labangon Cebu City at 5:30 am Thursday.

Salazar, who was both a hitman and a bodyguard of Diaz, was placed under surveillance for months prior to his arrest, Albiar said.
Police officer killed in Toledo City vehicle mishap

A POLICE officer died after the motorcycle he rode on tripped when he passed by a roadside culvert in Barangay Matab-ang in Toledo City at 2 am Thursday.

Gamboa is assigned at the Balamban police precinct and was headed home to Barangay Poblacion, Toledo City when the accident occurred.

Barluado said a multicab passenger identified as a certain Rosita Sepe saw Gamboa’s speeding motorcycle before it tripped on the roadside culvert.

Two police officers who responded to Sepe’s call for assistance found Gamboa lying unconscious at the bottom of the culvert.