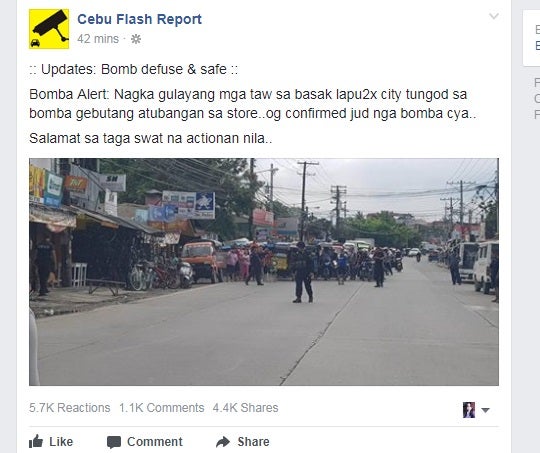 A Cebu-based photojournalist denied involvement in a bomb hoax that was posted in the Facebook page Cebu Flash Report (CFR).

Alan Tangcawan said he had nothing to do with last Tuesday’s CFR post that stated that a bomb was found near a stall in Barangay Basak, Lapu-Lapu City. No bomb was found when police rushed to the area.

“I cannot afford to destroy the company I work for and the whole Cebu media,” said Tangcawan after meeting with Senior Supt. Jonathan Cabal, chief of the intelligence division of the Police Regional Office (PRO-7) Thursday afternoon.

Tangcawan said he removed himself as the page’s administrator. He said he may have been dragged into the case after some of his photos were repeatedly shared by the CFR Facebook page.

Cabal said despite his appearance yesterday, Tangcawan remained as one of the “persons of interest” in the incident being investigated by the regional anti-cybercrime unit.

Another personality, a worker of the Lapu-Lapu City Hall, is scheduled to appear before the police tomorrow after he was identified as one of the Facebook page administrators.