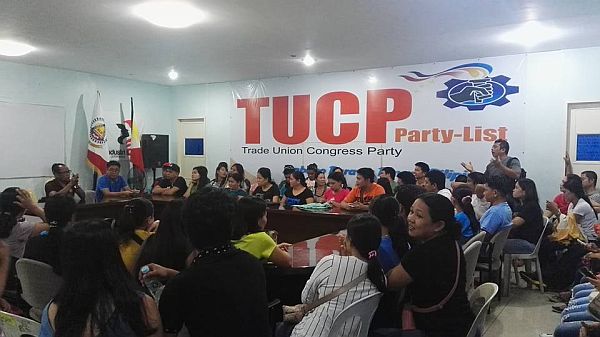 Employees of the Cebu Nisico Corporation sought the help of the Association Labor Union after they were told by their Japanese employer to already cease from reporting to work.
/Jhunnex NApallacan

Japanese company claims to have suffered from financial difficulties

A locator of the Mactan Economic Zone (MEZ) 1 closed shop on Saturday leaving at least 160 of their employees jobless.

The management of Cebu Nisico Corporation (CNC) that manufactures optical lens told their employees in a memorandum dated August 5 that they could no longer continue their operations because of their draining financial resources.

“We regret to advise (you) that despite efforts to save the company, management has failed to secure the financial support from our lenders. It has been (like this) for months that we survived on a hand-to-mouth existence and we have reached the end of the rope. Our financial resources could no longer afford to proceed with our operations,” the memo said.

But the management promised to release the employees’ salaries that will be computed for a month’s period or until September 5.

At the same time, employees will also be given their unused vacation and sick leave conversions together with a percentage of their 13th-month pay that will be computed based on the number of months they served the company in 2017.

Release of the employees’ cash claims is scheduled on August 16.

No prior announcements were made, he said.

On Saturday, Rapiza, 38, said that all of the CNC employees were told to vacate their work stations and to bring with them their personal belongings.
They were only handed a copy of the memo when they reached the guard house.

Rapiza said their company continues to get orders from clients abroad while several of their raw materials are on standby for processing.

He suspects that the management merely wanted to get rid of their union that was created early this year and is backed by the Associated Labor Unions (ALU).

In an election held on January 10, 2017, Rapiza said majority of the 140 rank and file workers voted yes to a proposal to form a labor union in their workplace. The company has a total of 160 employees, including the administration staff.

Their union has 80 members to date.

Rapiza said the management appealed at least two times before the Department of Labor and Employment (DOLE) against the employees’ decision to form a union, but the labor department instead issued an order recognizing the CNC Employees Union.

After their creation, Rapiza said, the union wrote the management so they could already start Collective Bargaining Agreement (CBA) negotiations. But the management replied with the issuance of an order to already cease their operations.

Rapiza complained that the company memo that they received on Saturday did not even mention about giving them separation pays that will be computed based on the length of service that they have rendered.

Working as a machine operator for 19 years, Rapiza said, he should be given compensation for the service he has rendered their company.

Separation pay will also help co-employees who may find it difficult to find other employment opportunities because of their age, he added.

Lawyer Jonas Asis, regional vice president of ALU-Central Visayas, told the displaced workers that the union will initiate filing of illegal dismissal case against the management this week.