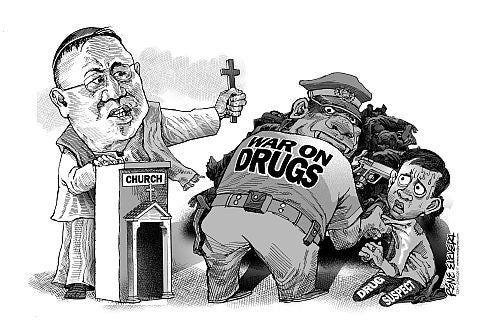 The call for a halt to the killings of drug suspects issued by both Manila Archbishop Luis Tagle and Cebu Archbishop Jose Palma came interestingly just as President Rodrigo Duterte gave a speech last Monday that marked the 34th anniversary of the assassination of senator Benigno Aquino Jr., father of his predecessor, the former president Benigno Aquino III.

In his speech, President Duterte lauded the late senator’s philosophy of peaceful revolution against the Marcos dictatorship and how he sought to end the Marcos Martial Law regime through peaceful means.

Considering that he skipped the observance of his first Edsa Revolution as president last February owing to his political ties with the Marcoses, President Duterte paying tribute to the late senator Aquino was quite surprising especially when viewed in the light of his administration’s relentless war on illegal drugs, which has racked up thousands of victims, the latest being a senior high school student.

Of course the President’s apologists would like to remind his critics that there is a world of difference between resistance against a dictatorship and a war against a persistent menace that claimed and ruined lives across all strata of society.

But the means through which such war is being waged is similar to that employed by the Marcos Martial Law regime, which ignored due process and the rule of law in favor of unrelenting hunting operations made to appear as shootouts but which, as shown in Kian delos Santos’ case, look more and more like summary executions.

President Duterte is fond of calling drug suspects “idiots” for not only choosing to pursue and get caught committing a criminal activity but for putting up a fight against police even when they are cornered.

So how does one describe law enforcers who, after being faced with the reality that they have no evidence to detain, let alone arrest drug suspects, still insist on pressuring said suspects to make it look like they engaged in a firefight with police even if the suspects know they are outnumbered and outgunned in the first place?

The latest findings on Kian’s case showed that one of his bullet wounds happened to be located in the back of his head which strongly suggest that he, like so many others before him, had been summarily executed.

In issuing their call, both Tagle and Palma reiterated their stand against the killings — the so-called shootouts that in reality were staged summary executions — and not against legitimate police operations that may or may not end with the suspect/s dead but more often result in more evidence exposing the real brains behind the drug trafficking and their coddlers.

Still, this call for an end to the killings will be dismissed by the Duterte administration as yet another example of human rights whining of “bleeding-heart liberals.”

Read Next
Mary Joy, Uber and the race of our lives