Giving back and paying it forward 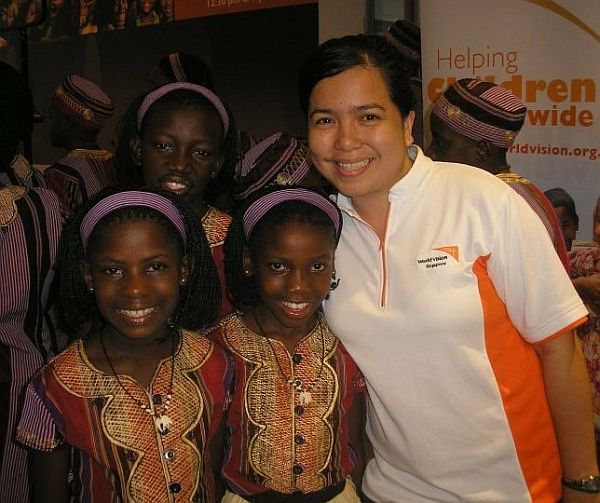 Ethelrida Pajao has been the donor relations officer of World Vision Singapore before she decided to leave her permanent residence status in the island-state and move back to the Philippines. With her in this 2012 photos are the visiting World Vision Singapore partner, Watoto Children’s Choir from Africa.
Contributed Photo

A robbery incident in Cebu City in the mid-80s changed the life of a little girl named Ethelrida Camiguin, who was then living in Barangay Combado, Maasin City, in Southern Leyte.

Her parents, Erlinda and Godofredo, were in Cebu working as scavengers, selling to junk shops scraps they gathered after weeks of going through trash cans and rubbish piles — bottles, glass and tin cans.

But they lost all that they earned to a robber. Instead of coming home to Leyte with money for the family, they came home empty-handed, uncertain about how to feed Ethel and her two younger siblings.

Sacrifices had to be made.

By then, back in Maasin, Erlinda decided to work as a house help while Godofredo became a worker for a junk shop. Ethel and her siblings were left under the care of their maternal grandmother.

With barely enough cash left to send the children to school and without a stable job to support all three children, then grade 3 pupil Ethel became a sponsored child of World Vision Philippines.

Her parents provided the financial counterpart by giving her school allowance.

Her education, which she was privileged to experience all the way to college, was made possible by the donations of kind-hearted people to World Vision.

In 1997, Ethel graduated with a degree in Mass Communication from Saint Theresa’s College in Cebu City. She then went on to work for World Vision Philippines as a communications assistant for seven years. This was followed by a successful two-year stint as a customer service representative for a business process outsourcing company.

In 2007, she got married and became Ethelrida Pajao and moved to Singapore to join her architect-husband Dino Dante Pajao who was working for a landscape architectural firm.

She lived a comfortable life in one of the world’s most expensive cities, but last May, after 10 years of being a resident of Singapore, she packed up her bags to come home to the Philippines. Her husband, Dino, followed suit three months later.

Together, they are working towards one mission: contribute to nation-building through the arts.

Ethel’s decision to go back home to serve the Philippines was not a hasty one.

She thought about it for five years.

“It is true that at some point in your life, you start reassessing what’s really important to you and it doesn’t matter if your earn a lot or if you’re comfortable. I felt that family is more important so we decided to come home to Cebu and leave Singapore, where my husband and I were permanent residents,” shares Ethel, who recently turned 40 years old.

Friends disapproved of the decision, telling her it is unwise to move to a country where corruption persists and where quality of living is on a downward slope.

But Ethel is as stubborn as she is nationalistic.

“I refuse to believe that the Philippines will forever be doomed. After 10 years in humanitarian work and customer relations, I know I can give back to my country,” she shares.

Ethel believes this is a result of the kindness she experienced from people who helped her finished her studies.

“They said when you’ve experienced kindness, it stays in you. You will always find an outlet to give back,” she says.

It has only been four months since she came home to Cebu, but Ethel has hit the ground running by organizing “Watercolor for Life,” a painting-for-a-cause event where sales proceeds will go to World Vision Philippines’ rehabilitation efforts in Marawi City. The exhibit is up until October 1 at the lobby area of Radisson Blu Cebu.

With her husband, they started DE’s Artroom, a Cebu-based distributor of premium art materials that they decided to set up two years ago while they were still based in Singapore.

Ethel organizes Art Jams or Art Tambays with friends and art enthusiasts who have now become part of Artkada Cebu.

Her Artkada Cebu family along with supporters from the International Watercolor Society Philippines and Philippine Guild of Watercolorists joined her in this recent endeavor where 46 artists gave up 83 paintings closest to their hearts and donated 60 percent of the proceeds for Marawi’s rehabilitation efforts.

“I love to tell this to younger Filipinos. If you want to make a difference, check your lifestyle. What can you do to help? Start with what you have,” shares Ethel.

Ethel started doing watercolor paintings barely two years ago but has completely fallen in love with the art.

Her husband Dino paints using the medium and was her first teacher.

Ethel turns her passions to possibilities and utilizes her expertise and network to make art literally come alive to rebuild people’s lives.

For Ethel, doing this is a dream come true.

It also gives her a sense of fulfillment that she found the answer to the question asked of her and Dino during their Pre-Cana (pre- wedding) seminar 10 years ago: “What can you do to give back to society?”

“We do not remember it, but we actually wrote there that we will give back to the community through the arts. It’s happening now. It’s amazing how everything fell into place,” she says.