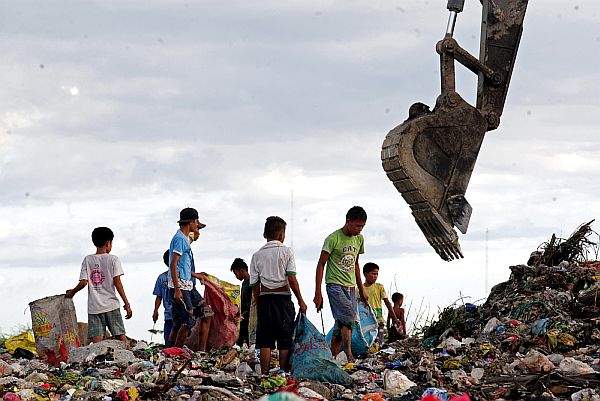 More than 600 residents scavenging for a living at the Inayawan landfill fear losing their livelihood to City Hall’s waste to energy incinerator project.
CDN File Photo

About 50 scavengers of the Inayawan landfill were joined by ecology advocates and militant groups in denouncing Cebu City Hall’s plans to set up a waste to energy plant near the landfill site.

The protesters sought a meeting yesterday with Cebu City Mayor Tomas Osmeña, who was not in his office at the time.

The EcoWaste Coalition later distributed papers outlining their opposition to the waste to energy incinerators.

“Many families and small businesses depend on the recovery of recyclable materials for livelihood. The waste incinerator will compete with us in collecting recyclables that we collect, sort and sell,” said Aniceta Abadejao of the group Gagmay’ng Kristohanong Katilingban in Cebuano.

Abadejao said there are more than 600 residents that scavenge the landfill for their livelihood.

The protesters earlier attended a workshop at the University of San Jose-Recoletos (USJ-R) by the EcoWaste Coalition and Philippine Earth Justice Center.

Abadejao said their petition was received by the mayor’s staff.

She said the scavengers were asking the mayor to give them livelihood rather than pursue the waste to energy incinerator project.

Tony Dizon, coordinator of the Quezon City-based Eco-Waste Coalition, said they have conducted dialogues in schools to raise awareness on the harmful effects of waste to energy incinerator plants to the environment.

Environmental groups claimed that waste to energy incinerators could produce pollutants that would harm nearby communities.