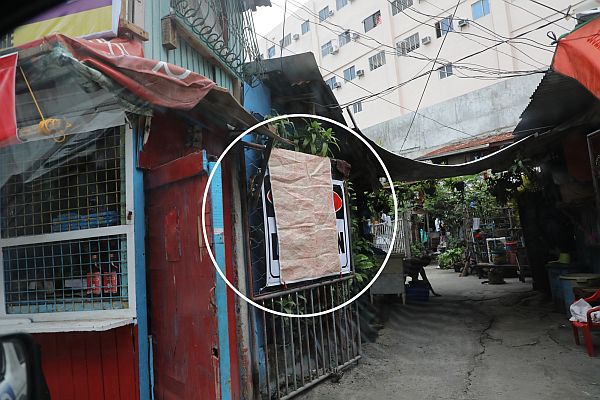 SHAME CAMPAIGN STARTS? Ermita Barangay Captain Felicisimo “Imok” Rupinta says he has no hand in the posting of a tarpaulin bearing the warning “Beware. This area is a drug den before” (covered with a floor mat in photo) in two houses in the barangay. Rupinta says he has yet to talk with the Commission on Human Rights before he will implement the shame campaign. (See story on page 2) Meanwhile, the Department of Interior and Local Government is trying another alternative to gain information in the war against drugs — placing tip boxes in Cebu City’s barangays.
(CDN PHOTO/TONEE DESPOJO)

Boxes to be placed in villages where residents can drop names of those involved in drugs, corruption; CHR, church wary

This is one drop box where you don’t want your name to be drawn.

The Department of Interior and Local Government (DILG) plans to put up boxes in each of the 80 barangays in Cebu City where individuals could drop the names of those involved in illegal drugs and corruption.

But even before the program could be implemented in November, the Commission on Human Rights in Central Visayas (CHR-7) and the Catholic Church, as well as some village officials, have already expressed concern as this could lead to abuses.

“Those who have enemies can use the drop box to agonize them or tag them as drug personalities in whatever capacity. That’s the difficult thing,” CHR-7 chief investigator Leo Villarino said.

Msgr. Esteban Binghay, a former episcopal vicar of the Archdiocese of Cebu, said the putting of suggestion boxes to gather information on illegal drugs operation has both advantages and disadvantages.

“The advantage is those of goodwill can express their opinions. On the other hand, its disadvantage is it can be used for any other purpose,” he told Cebu Daily News over the phone.

“There are always limitations. People can use it for personal reasons,” he added.

Pia Monina Lovete, chief of the DILG-Cebu City local government monitoring and evaluation, appealed to the public not to use the drop box for their own personal interests.

“The intention is good, but sometimes, it is in the implementation that we get into trouble because this can be used for their own personal ends,” she said.

“Thus, we appeal to the goodness of our people not to abuse or use this for their own intention,” she added.

The putting up of drop boxes is included in the revised guidelines issued by the DILG in the implementation of the Mamayang Ayaw sa Anomalya, Mamayang Ayaw sa Iligal na Droga (Masa Masid) program.

Masa Masid is a nationwide project aimed at fostering “community involvement” in the administration’s campaign against illegal drugs, criminality and corruption, according to the nine-page guideline issued by DILG Officer-in-Charge Catalino Uy on August 29.

The drop boxes to be set up in barangay halls are among the prescribed methods of reporting aside from hotlines, e-mail and text messaging.

The program would be implemented in Tacloban City in Leyte starting in October.

Lawyer Darwin Bibar, Tacloban local operations officer, explained that the drop box can be used as a means to report corruption and abuses being committed by village officials, and not just identifying those involved in illegal drugs, while hiding in the cloak of anonymity.

“We are doing this with the consent of the barangays, and we have requested the (barangay people) to report all kinds of crimes to include illegal drugs,” Bibar said.

He said he and two members of the technical working group, who are also with DILG-Tacloban, would open the drop boxes weekly and take out the envelopes where the names of erring individuals would be written inside.

Bibar said they would conduct the verification process although he could not exactly explain how they were going to do that.

But he said that if the crime involved illegal drugs, the names would be referred to the Philippine Drugs Enforcement Agency and the Philippine National Police.

If these involved corruption and abuses of local officials, he added, the matter would be given to the Office of the Ombudsman.

Asked on the possibility that this program would be abused, Bibar assured that a mechanism had been put in place to verify the information.

“There is a safety measure because we are aware that this could be subjected to abuse. We will ensure that this report will undergo validation process and will be forwarded to the concerned agency like the city police or PDEA or Office of the Ombudsman,” he said.

“We will not just act on them without undergoing a validation, considering this will be done anonymously,” Bibar added.

In the case of Cebu City, DILG Cebu City Director Emma Joyevelyn Calvo admitted that she didn’t have the details on the implementation of the drop boxes.

Calvo said they were set to conduct orientations with the Masa Masid teams in each barangay in the third week of October in time for next month’s implementation.

This early, Michael Gacasan, village chief of Guadalupe, the city’s biggest barangay, said that while he had no problem with the drop boxes, these might be used by some people to get back at those whom they had personal grudges.

“Basin magamit na sa ilang mga kontra nga silingan. Ilang isuwat ang ngalan didto. Nakasuway na man mi ana. Gi-raid g’yud ang balay pero wala diay (It might be used by some against their enemies. They might write the names of their enemies there. It happened to us once. We raided a house, but it turned out to be a prank),” he added.

Gacasan said it would be better if the people would just send a letter or personally report a crime in the barangay so they could ask follow-up questions and clarifications.

The problem with drop boxes, he said, was that the reports would be anonymous.

Apas Barangay Captain Ramil Ayuman said that even before the DILG’s Masa Masid, he had implemented a similar program in his village which he called “Apas Kontra Droga Movement” that allowed concerned citizens to leave their confidential letter at a desk in the barangay.

“The verification is done through the Badac (Barangay Anti-Drug Abuse Council). We do assessment through reports from homeowners’ associations and neighbors. It’s easy to check if there are really illegal drugs-related activity through neighbors that could see it themselves,” Ayuman said.

He said the Badac, which holds regular meetings in the barangay, is composed of barangay officials, homeowners associations and the police among others.

But Ayuman said it is important to verify these reports to weed out the erroneous tips as he acknowledged that such a program is prone to pranks.

And this was what the CHR wanted to prevent — innocent individuals being investigated because someone was angry with them.

Villarino of CHR-7 said they were planning to discuss the program during their meeting with the DILG, the PDEA and barangay officials on Wednesday.

“The issue about the drop box is so timely as we try to harmonize government programs and make sure everything adheres to respect for human rights,” he told Cebu Daily News over the phone on Monday.

Villarino said putting up “suggestion boxes” can be prone to abuse because some people might take advantage of it to destroy the reputation of their enemies.

“Those boxes will become a depository of any information: verified or unverified. The problem here is how to filter the information,” he said.

Villarino said the putting of suggestion boxes to gather information on the drug war is similar to a shame campaign where stickers or tarpaulins with messages are attached on houses of suspected drug users or pushers.

“I would like to stress the dignity of every human being. We just could not humiliate people especially without appropriate any complaints filed against them,” he said.

“Tarpaulins or drop boxes is opposite to the intent of keeping information confidential,” he added. /with Inquirer