Brgy chiefs wary of putting tip boxes in their areas 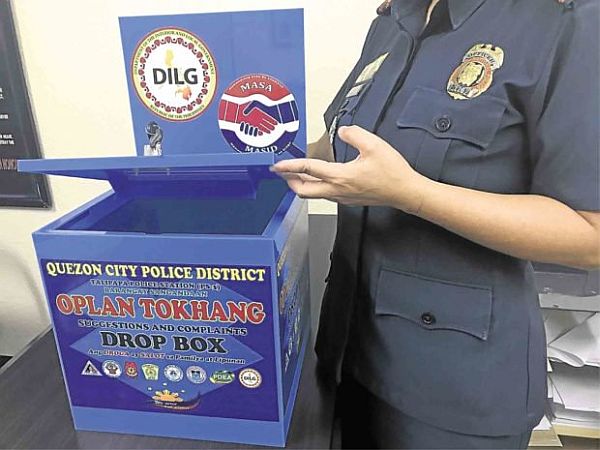 Quezon City has also put up uniform boxes for anonymous tips in the war against drugs.
(Inquirer file)

ASSOCIATION of Barangay Councils (ABC) Cebu City president Philip Zafra has also expressed his reservations on the putting up of boxes where people could drop names of those allegedly involved in illegal drugs in each of the city’s 80 barangays.

“I agree with the reservations of the other barangay captains. This could be used to destroy the reputation of other people,” Zafra told Cebu Daily News.

The program is set to be implemented by the Department of Interior and Local Government (DILG) in Cebu City this coming November.

According to DILG Cebu City Director Emma Joyevelyn Calvo, they are scheduled to meet with the Masa Masid teams in each of the city’s 80 barangays on the third week of October, before the actual implementation next month.

According to an Inquirer report, the putting up of drop boxes for anonymous tips in the war against drugs was already implemented by the Quezon City Police District since 2016.

The QCPD program was implemented ahead of the recent DILG order for local government units to have similar initiatives under the program “Masa Masid.”

The new thing about the QCPD program is that last Monday, they now have uniform blue boxes for this purpose.

Meanwhile, Calvo assured that these drop boxes are actually “suggestion boxes” and not really for the submission of names of people involved in illegal drugs. Some barangay captains in Cebu City already expressed concern over the program.

Zafra said that even if the intention of the drop boxes is to solicit suggestions and comments from the public, people can still freely put in names of those they suspect, whether rightly or wrongly, to be either drug users or drug pushers.

“It is expected that any information could be put in those drop boxes like the sketch or other information about people allegedly involved in illegal drugs. It would really matter. We can’t choose what the people want to put inside the box,” he said.

Aside from Zafra, some other barangay captains also expressed concern over the program earlier.

Barangay Captain Michael Gacasan of Guadalupe, which is the city’s biggest barangay, said they have already experienced this kind of problem before.

He said somebody gave wrong information about a certain person allegedly involved in drugs. When they raided the place, they found nothing.

Apas Barangay Captain Ramil Ayuman said that while the program could be a good reporting mechanism, he also acknowledged the disadvantage of misinformation.

The barangay captains agreed in saying that people can still freely report this kind of confidential information directly to them.
In fact, Zafra said this is what’s being practiced right now.

“Either through text directly sa barangay captain or submission of letters. They would usually say they don’t want their names to be revealed. That’s the usual. It is also convenient,” he said.

He added that after receiving this kind of reports, it would be subject to proper evaluation and validation to be conducted by the barangay.

For one, he said they will interview neighbors and also refer to their own files and records in the barangay.

These information will also be forwarded to the Philippine Drug Enforcement Agency (PDEA) and the Cebu City Police Office (CCPO) for their own validation.

CCPO Information Officer, Insp. Llewelyn Reyes, said that the drop box campaign might be a tool of the local executives to help the PNP in their drive against illegal drugs.

(We will support if they [DILG] will implement that project but here in CCPO we will still stick to our information gathered through our intelligence reports.)

“Hindi naman makaka-preempt sa investigations natin yan kasi we will still have to verify. Hindi naman ibig sabihin na isinali yung pangalan mo ay ita-tag kana as drug personality,” (That will not preempt our investigations because we will still have to verify the names. Being named in those drop boxes doesn’t automatically tag someone as a drug personality.) Reyes told Cebu Daily News in a phone interview. /Correspondent Rosalie O. Abatayo