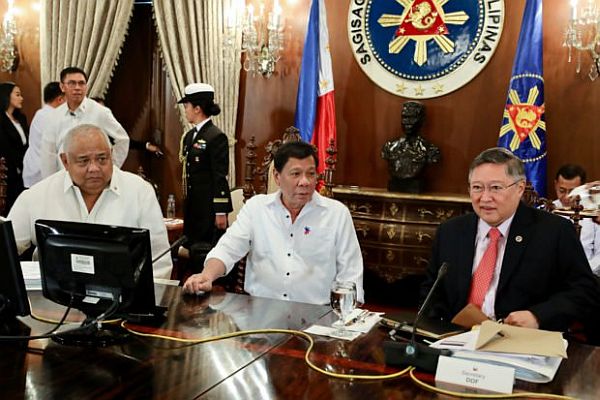 President Rodrigo Roa Duterte presides over the National Economic and Development Authority (Neda) Board Meeting at the Aguinaldo State Dining Room in Malacañang in this file photo taken on June 27, 2017. Also in the photo are Executive Secretary Salvador Medialdea and Finance Secretary Carlos Dominguez III.
(PHOTO BY RICHARD MADELO/PRESIDENTIAL PHOTO)

Even as foreign direct investment (FDI) lagged so far this year, economic managers were optimistic of the gains from President Rodrigo Duterte’s overseas visits, which they said will bring in $59.3 billion in economic benefits.

Finance Secretary Carlos G. Dominguez III, in a text message to reporters Tuesday night, said the President’s foreign trips “resulted in various deals such as $37 billion worth of investment pledges between business-to-business through the signing of memorandum of understanding/letter of intents; $18 billion in official development assistance (ODA) funds; and $4.3 billion in trade,” citing data from the departments of Finance and of Trade and Industry.

It was earlier reported that the government spent at least P501 million for 19 trips to 17 countries made by President Duterte since he took office last year.

The figure on economic gains provided by Dominguez was higher than the earlier estimate of about $38.6 billion, or almost P2 trillion, in investment pledges, loans as well as private corporate deals.

Also, Socioeconomic Planning Secretary Ernesto M. Pernia said Sen. Franklin Drilon should not focus on figures on “new” FDI, as it was merely a component of total FDI.

“Sen. Drilon narrowly looks at so-called ‘new’ FDIs only. Fact it with reinvestments reckoned as well, drop in total FDIs was only 14 percent by the second quarter, not 90 percent,” Pernia, who heads the state planning agency National Economic and Development Authority, was quoted by Dominguez as saying in a separate text message.

“Reinvestments are just as good as expansion of operations does create employment multipliers, too. This is the standard method of measuring FDIs,” Pernia said.

“But at the hearing on the Neda budget last Friday, Sen. (Franklin) Drilon would have nothing of this and insisted on his view,” Pernia added.
In a statement last week, Drilon said Bangko Sentral ng Pilipinas data on FDI showed a “significant deceleration” in new investments.

Citing end-June data, Drilon said that the entry of new investments, not money reinvested in existing businesses, dropped 90.3 percent to $141 million in the first six months of 2017 from $1.448 billion a year ago.

The latest data released by the BSP last Tuesday showed that as of July, equity other than reinvestment of earnings declined 81.5 percent to $272 million from $1.471 billion during the first seven months of last year.

Including all FDI components, the net inflow of job-creating FDI from January to July went down 16.5 percent to $3.904 billion from a year ago’s $4.677 billion.

The year-on-year drop in seven-month — FDI was attributed by the BSP to lower inflows of net equity capital — at $272 million, down from last year’s $1.5 billion.

In July alone, FDI declined by a faster 37.9 percent to $307 million from $493 million in the same month last year as well as reversing the 182.7-percent year-on-year jump posted in June.

The July FDI figure was the lowest monthly inflow in 13 months, or since June last year’s $238 million, BSP data showed.