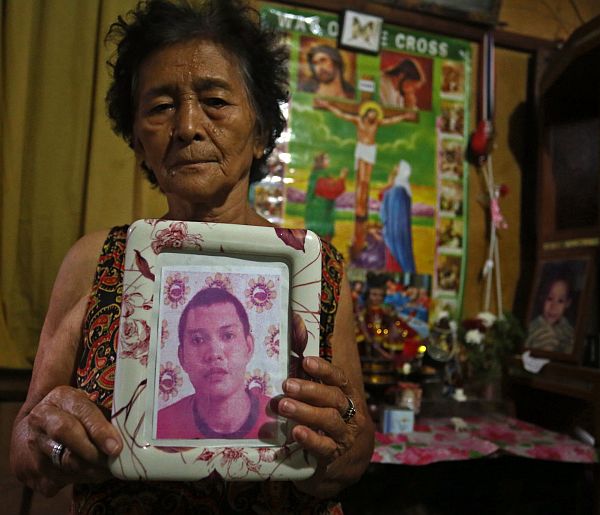 While she keeps herself busy preparing the meals she would sell to customers and feed her family with for today’s All Saints’ Day observance, Nicolasa Inesola still remembers the day she lost her grandson Jerald Cedeño to police officers she accused of killing him last year / CDN Photos/Lito Tecson

More than a year after losing her 22-year-old grandson to a police operation away from their home, 75-year-old Nicolasa Inesola has a special plea for All Saints’ Day and All Souls’ Day on November 1 and 2 respectively.

“Nagpakiluoy ko. Ihunong na ang patay (I beg you. Please stop the killings),” she said in an interview inside her home in Barangay Tisa, Cebu City, last Tuesday.

Inesola’s grandson Jerald Cedeño died in an alleged shootout with two policemen several steps away from their home on July 23 last year.

She claimed the young man was deliberately killed by the police. The pain of losing Cedeño has not waned for Inesola.

“Walay kasing-kasing og balatian ang mga naghimo niini. Wala silay katungog mopatay. Bugtong ang Diyos lamang ang makakutlo sa kinabuhi sa tawo kay siya man ang naghatag niini (Those who killed my grandson are heartless. They don’t have any right to kill. Only God can take lives because it is He who gives life),” said Inesola as tears welled up in her eyes.

Two policemen — SPO2 Renante Nioda and PO2 Arnold Cabildo — picked up Cedeño at their home and brought him to a hill in Barangay Tisa.
Inesola said she quickly got her cane and tried to catch up. But the policemen were too fast for her.

In just about a minute, she heard bursts of gunfire.

She kept walking until she saw Cedeño lying face down on the ground.

While waiting for Scene of the Crime Operatives (Soco) to arrive, Inesola and Cedeño’s mother Patricia allegedly saw Nioda and Cabildo put a gun at the right side of Jerald’s body and a small plastic sachet on the left.

Based on the autopsy report released by the National Bureau of Investigation (NBI), Cedeño, whom police tagged as a drug pusher, suffered two gunshot wounds on the chest and his left shoulder. He also lost a tooth.

With the help of the Commission on Human Rights (CHR), Inesola filed murder charges against the police officers at the Ombudsman.

While saying she supports the Duterte administration’s war on drugs, Inesola detests how drug suspects were killed without due process of law.

“Kon dunay nahimong sala ang tawo, ipapriso lang. Duna man tay mga balaod. Ayaw patya kay dunay maangin nga mga inosente (If a person committed a mistake, then put him in jail. We do have laws to adhere to. Don’t kill because innocent lives might be lost),” she said.

On November 2, All Souls’ Day, Inesola said she and Patricia would visit Jerald’s remains at the Calamba Cemetery and pray that the government would end its brutal campaign against illegal drugs.

Seated on a wooden floor, Inesola tore fresh banana leaves into pieces where she would place pieces of puto (steamed rice cake).

Some of them will be sold to customers, while the rest will be eaten by their family to mark All Saints’ and All Souls’ Day.