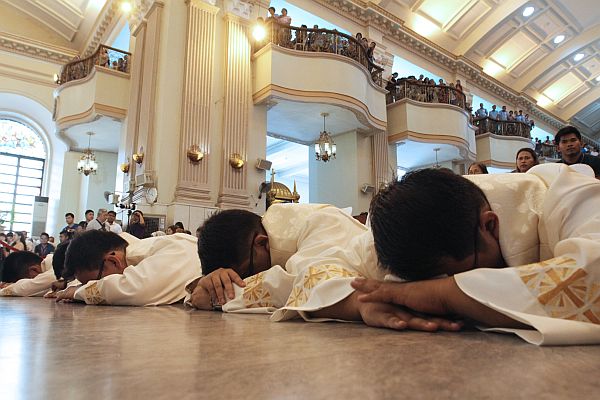 Cebu Archbishop Jose Palma leads the ordination of 12 new priests (above) at the Cebu Metropolitan Cathedral in this August 2016 photo. Leaders of the church such as Palma have shared their views on Pope Francis’ proposal to ordain married men as priests in the Amazons to address the issue of the lack of priests in that region.(CDN PHOTO/JUNJIE MENDOZA)

WHILE Brazilian bishops have yet to vote on the Holy Father’s proposal to ordain married men to become priests, Cebu Archbishop Jose Palma said application of such a proposal in the Philippines would require serious discernment.

Palma clarified that the idea of “viri probati” or men whose faith has been “tested,” has been floated as a possibility to address the shortage of priests in remote Amazon region which currently has only one priest for every 10,000 Catholics.

“Maybe the idea was being floated for the people to react, discern or pray over. Usually the pope would float ideas, but the concretization is usually entrusted to a special committee in Rome,” Palma said.

“Many of the ideas, they have to be discerned, prayed over and discussed and subjected into study by a committee in Rome. If something like that will be discussed in the country, we will have our own way to discuss that,” he added.

On November 2, the pontiff reportedly gave the green light for Brazilian bishops to debate on allowing married men who are viri probati to perform priestly duties in the remote areas of the Amazon.

Fr. Matthew Schneider, a Catholic Stand author based in Washington, D.C. posted in his twitter threads said that the idea of married priests is not a new concept among Catholic churches.

The discussion on the implementation of married men to become priests are expected to highlight the special Synod of Bishops for the Pan-Amazon region in Rome on October 2019.

Claudio Cardinal Hummes, the president of the Episcopal Commission for the Amazon, has requested the Holy Father to allow married men “of great faith” to serve as priests in places where paganism is displacing Catholicism.

In a New York Post report, Pope Francis reportedly told one of his monsignors to “speak to the bishops and tell them to make valid proposals” about such ordinations.

In an interview last March, the Pope said he was open to the idea of having certain men called “viri probati” — married men of great faith — serve as priests.

“We must consider if viri probati is a possibility. Then we must determine what tasks they can perform, for example, in remote communities,” he told

Germany’s Die Zeit newspaper.
The married priests would not have to take a vow of celibacy.

Read Next
Church calls on public to join activities