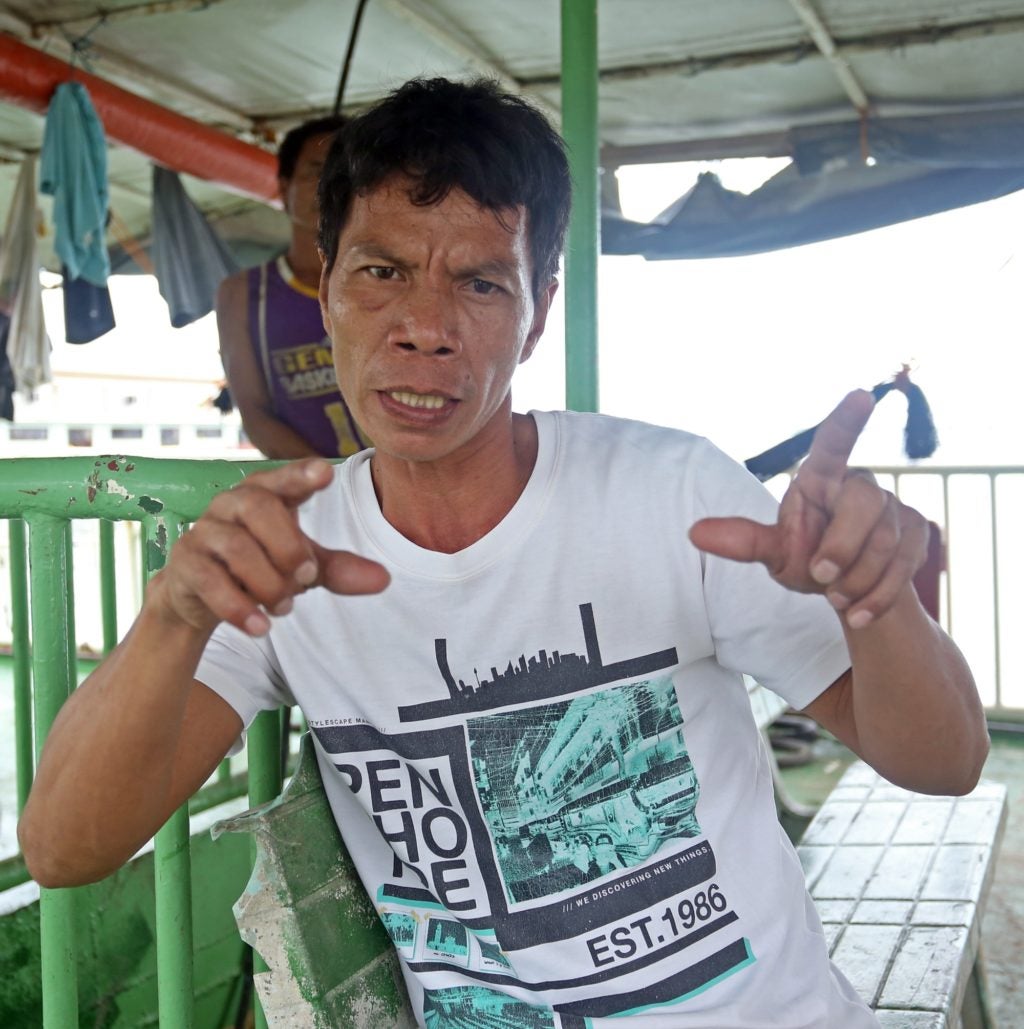 SHIP CAPTAIN Ariel Mancio of cargo vessel MV Gemini 10 insists that Felix Taytayan, who is accused of killing PO1 Mae Sasing, was on board his vessel on the hours prior, during and after the ambush-slay of the policewoman in Mandaue City on October 31, 2017. Mancio also shows to reporters the ship’s manifest where the name of Taytayan (encircled) was listed as among the crew members on board the vessel on the day Sasing was shot dead.
CDN PHOTO/LITO TECSON 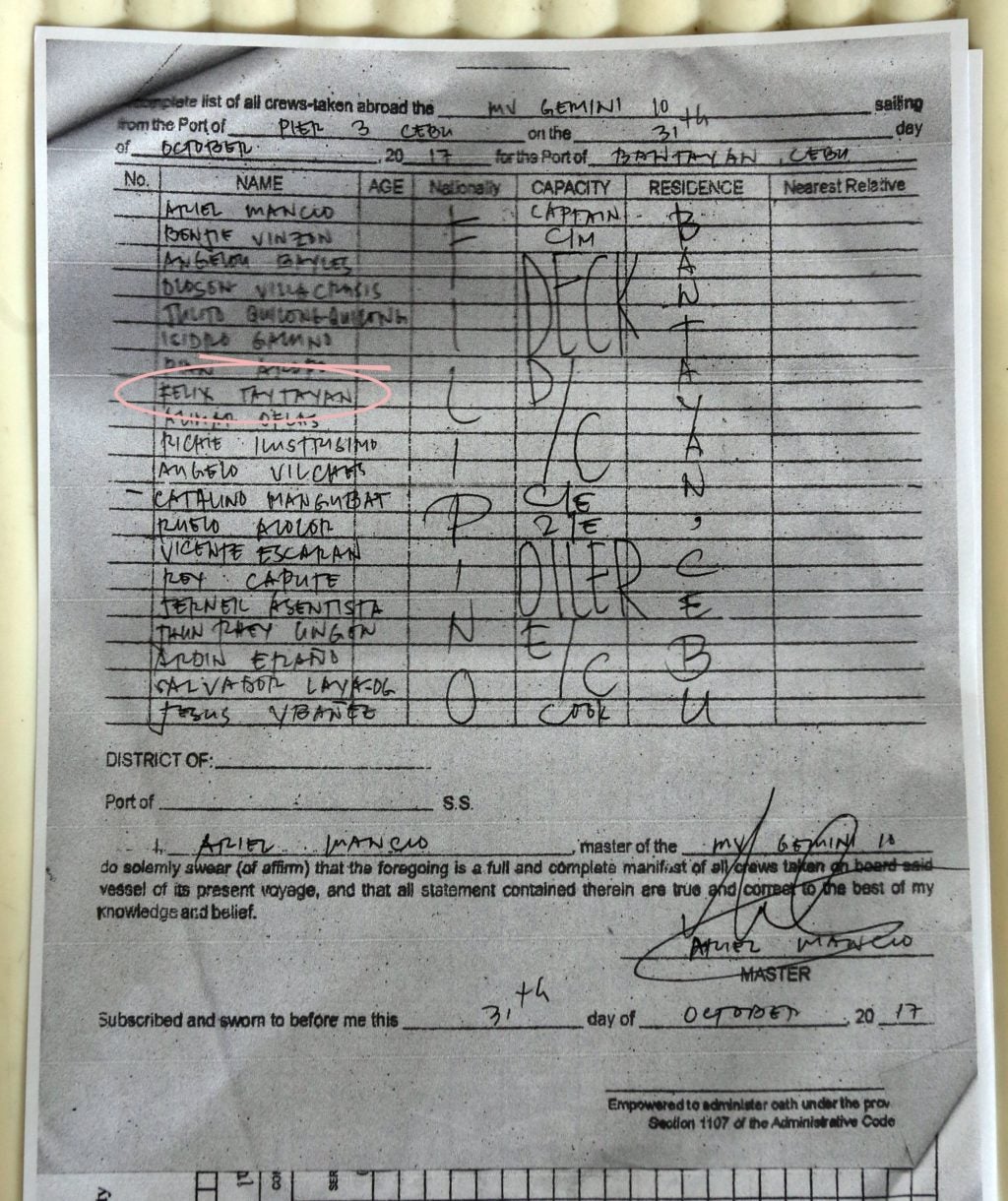 Did the police get the wrong man?

The captain and crew members of the cargo vessel where murder suspect Felix Taytayan has been working as a part-time porter for the past ten months have attested that he was with them at the time that PO1 Mae Sasing was killed in an ambush at around 7 p.m. on October 31.

Ariel Mancio, the captain of MV Gemini 10, said he was certain that Taytayan never left the vessel from the time they docked at Pier 3 in Cebu City at 4 a.m. on October 31 until they left for Madridejos town on Bantayan Island at 11 p.m., or about 19 hours later.

“Magtapok man gyud mi, mao nga walay mawagtang sa imong panan-aw. Lisud makaikyas gikan dinhi kay gi-account gyud na namo ang tanang tripulante (We always gather all the members of the crew so no one would escape our attention. It would be hard to escape because everyone was accounted for),” he added.

Mancio said they were dumbfounded when they learned that Taytayan was tagged as Sasing’s shooter.

The ship captain said he and the crew of MV Gemini 10 are willing to execute sworn statements and testify in court in favor of Taytayan.

“Makapamatuod gyud mi nga wala na siya milakaw nianang adlawa. Maayo na siya nga tawo. Dili sa ingon nga naa mi gilabanan. Ang amo lang mao ang matuod gayud (We can attest that he never left the vessel [on the day Sasing was killed]. Taytayan is a good man. It’s not that we are defending him. All we want is for the truth to come out),” Mancio said.

He asked the police to secure footages of the closed-circuit televisions (CCTV) in the port area in Cebu City to determine whether or not Taytayan really left the ship.

However, Senior Supt. Roberto Alanas, director of the Mandaue City Police Office (MCPO), said a murder complaint was already filed against Taytayan at the prosecutor’s office last Monday and that they have at least three witnesses who attested that Taytayan had a hand in the ambush-slay of Sasing.

“We have a victim, complainants, evidence and witnesses. It’s now up to the prosecutor to decide on the case we filed,” he said in a separate interview yesterday.

Alanas said Taytayan earlier confessed of having killed Sasing shortly after he was arrested. But when presented to the media last Monday, Taytayan denied the accusations.

“Dili ako (Not me),” he said without elaborating.

Despite the claims of Taytayan’s companions in the cargo vessel, Mandaue City Mayor Luigi Quisumbing also believed the police got the right assailant.

“With these evidence and witnesses, we hope that justice will really be served to the family of the murdered officer, and hope to arrest the companion of the suspect the soonest possible time,” he said in an interview on Tuesday.

The police continue to look for the driver of the motorcycle that was used in the crime.

Sasing, 31, was driving her motorcycle on her way home to Barangay Jugan in Consolacion town, at around 7 p.m. last October 31 when two men on board another motorcycle drove by the victim when they reached Barangay Basak, Mandaue City. The back rider, whom police later identified to be Taytayan, then fired shots at Sasing.

Alanas said one witness claimed to have seen Taytayan talking to Sasing outside the policewoman’s residence in Barangay Jugan last October 30, a day before she was killed.

A few hours before the ambush last October 31, the police official said another witness saw Taytayan outside the City Public Safety Company (CPSC) of the Lapu-Lapu City Police Office where Sasing was assigned.

The third witness allegedly saw Taytayan shoot Sasing near the vicinity of Consuela Village in Barangay Basak, Mandaue City, at around 7 p.m. The suspect was reportedly not wearing a full-faced helmet when he shot the policewoman on board a motorcycle.

Taytayan’s name cropped up in the investigation after the police recovered text messages between him and Sasing through the latter’s cellular phone.
Sasing’s parents and siblings had confirmed in an interview last Sunday that the two were sweethearts during their college days when they studied criminology in a school in Cebu City. Their relationship, however, had long ended.

When Taytayan graduated in 2008, he applied to become a policeman but did not pass the exams. He decided to take nautical courses and is on apprenticeship at MV Gemini 6.

Taytayan reportedly began courting Sasing anew, but the policewoman treated him only as a friend. Sasing had a live-in partner for seven years and they have a seven-year-old daughter.

When presented before Mandaue City Assistant Prosecutor Henry Pascua last Monday, Taytayan opted to undergo a preliminary investigation, which gave him the chance to file a counter-affidavit and refute the allegations against him.

The prosecutor has 15 days to resolve the case. If there are sufficient grounds to indict Taytayan, charges will be elevated against him at the Regional Trial Court. Otherwise, the case will be dismissed.

Taytayan is temporarily detained at the Police Station 3 in Barangay Jagobiao, Mandaue City, while waiting for the resolution of the prosecutor.

Mancio said Taytayan has worked as an apprentice of MV Gemini 6 for the past 10 months, and a part-time porter of MV Gemini 10. The two boats sail from Cebu City to Madridejos and vice versa on Tuesdays and Sundays.

According to his coworker, Taytayan juggled his schedules to earn money for his family. Aside from the P1,500 monthly allowance he got as an apprentice, he also had a share of the money that crew members got for loading and unloading cargoes whenever they serve as part-time porters.

Mancio said he and 17 crew members, including Taytayan, left the port of Madridejos town aboard MV Gemini 10 at around 7 p.m. on October 30.

He said they had breakfast at around 5 a.m. before they manually unloaded the cargoes that included trays of eggs, hogs and several sacks of cement.

They had lunch at around 12 noon and went on to finish their work at around 5:30 p.m. on the same day.

Mancio said crew members are allowed to leave the vessel only from 12 noon to 1 p.m. Those who fail to return on time will receive a lesser pay than the rest.

At around 6 p.m., Mancio said he and the other crew members, including Taytayan, had dinner.

At around 7 p.m. — the time when Sasing was gunned down by two motorcycle-riding men in Barangay Basak, Mandaue City — Angelo Vilches, another apprentice, said he was with Taytayan while sitting on a bench inside MV Gemini 10.

After an hour, they transferred to the cabin area to lie down.

It was then, he said, when Taytayan suddenly reacted while browsing his Facebook account through his cellular phone.

“Niana ko, ’Lagi bai noh? Unsa kahay sala ani niya?’ Nahilom siya, unya nagsige siyag follow up sa balita through sa cell phone. (I told him, ‘What has she done?’ He became silent and kept on following up the news through his cell phone),” he said.

MV Gemini 10 and its crew left Pier 3 in Cebu City at around 11 p.m. of October 31 and arrived in Madridejos at around 7 a.m. the following day.

Taytayan’s name was reflected on the manifest of the Philippine Coast Guard as among the 20 persons on board MV Gemini 10 from Cebu City to Madridejos.

Vilches said he was surprised when he learned that Taytayan was arrested by the police last Friday, November 3.

“Nahibong ko. Nagkuyog man mi ato nga time nga gipusil ang victim. Dili lagi ko katuo. Nganong siya man ang gipasanginlan nga wala man na siya nilakaw sa barko? Diri ra gyud mi sa barko ana, naghigda (I was really surprised. I was with him at the time the victim was killed. I could not believe the allegations. Why was he accused of killing the victim when he did not even leave the vessel? We were lying down inside the ship at that time),” he said.