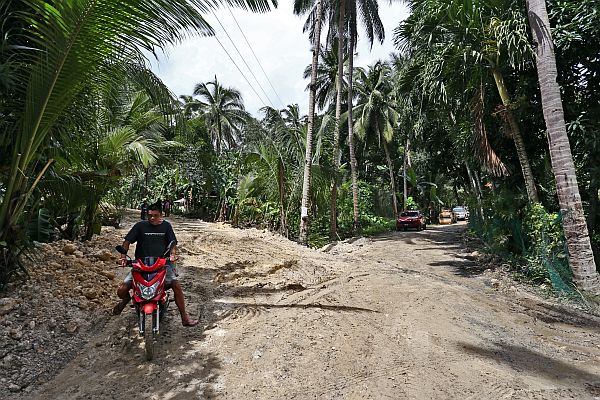 The diversion road used as access to and from the mountain barangays and the Boljoon town proper has been passable for all types of vehicles since Saturday.

But disaster officials of this fifth-class municipality, located more than 105 kilometers southeast of Cebu City, are still working round the clock to normalize the water level of one of the major rivers in the area which was blocked by boulders from the landslide which happened last October 27, that resulted to two artificial dams blocking its flow.

Eutemio Ternate, acting chief of the Municipal Disaster Risk Reduction and Management Office (MDRRMO) of Boljoon, told Cebu Daily News in a phone interview yesterday that the volume of water impounded in the two artificial dams in Lusopan River in Barangay Lower Becerril could still cause flash floods and mudslides, even if the volume has decreased by almost fifty percent, from 420,000 cubic meters last Nov. 9 to the present 230,000 cubic meters.

“The diversion road is now passable by all types of vehicles. It was reopened last Saturday after non-stop rains last week prompted us to close it because the soil back then was soft and saturated,” he said.

“But our clearing operations are not yet done, particularly on the two artificial dams on the river. We’re focused on the impounded water. The volume is still big. We sent one backhoe from the provincial government to deepen the river bed,” added Ternate.

He said this will ease the pressure of the impounded water and prevent the dam from breaking and will also act as a buffer should there be an increase in the river’s water level.

The first dam in Sitio Sangi in Barangay Lower Becerril was formed minutes after the landslide occurred on October 27. It was made from landslide debris such as chunks of soil, boulders and uprooted trees which blocked the flow of the Lusopan River.

On November 2, the municipal council of Boljoon placed six of its 11 barangays under a state of calamity following recommendations from geologists of the Mines and Geosciences Bureau–7 (MGB–7).

The MGB–7 recommended to declare Sitio Camp Franco in Barangay Lower Becerril as a Permanent Danger Zone and a No Habitation Zone when they discovered that the ground was saturated with rainwater, thus causing it to move and erode.

The landslide also damaged several portions of the 15-kilometer-long Becerril–Nug-as Road, and was unpassable for any type of vehicle, cutting off Boljoon’s mountain villages from the town proper, Barangay Poblacion.

This prompted government officials to include Barangays Poblacion, Upper Becerril, Nangka, Lunop and San Antonio as under a state of calamity.

Ternate said the Becerril–Nug-as Road remains off limits to vehicles since their clearing operations and rehabilitation of the road were constantly interrupted by occasional rains and continued ground movement.

“It is still dangerous to let vehicles pass. We even prohibited our heavy equipment to continue the clearing operations. The soil beneath the road is still very soft,” he added.

The diversion road, located 20 meters away from the Becerril–Nug-as Road, was first opened on November 8 with the help of various government agencies such as the Provincial Disaster Risk Reduction and Management Office (PDRRMO), Department of Public Works and Highways-7 (DPWH-7), Office of the Presidential Assistant for the Visayas (Opav) and the local governments of Oslob and Dalaguete.

Due to the unpredictable nature of landslide, PDRRMO issued an advisory to the municipal government of Boljoon to conduct a forced and massive evacuation last November 15.

But Ternate said they will do so only when heavy rains continue for more than four hours or the water level of the Lusopan River will surpass critical levels.

Fifty five families or 270 individuals were affected by the landslide in three sitios: Camp Franco, Sangi, and Upper Cansiloy of Barangay Lower Becerril in Boljoon.

But only 18 of them (120 individuals) voluntarily left their homes and sought safety in other barangays.

The remaining 37 families (150 individuals) chose to stay in these danger zones.