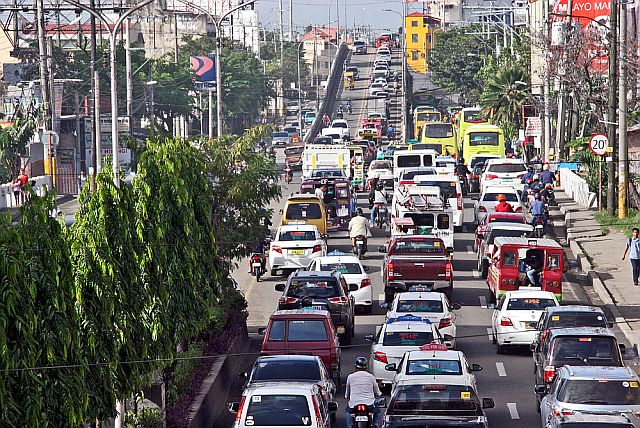 The stretch of N. Bacalso Avenue is now congested with vehicular traffic because of the closure of lanes brought about by work on the underpass project.
CDN PHOTO/JUNJIE MENDOZA

The slow progress of work on the P638-million underpass project on N. Bacalso Avenue and F. Llamas Street is creating a traffic gridlock that has become a cause for concern, said Cebu City Councilor Dave Tumulak.

He called for a meeting with the Department of Public Works and Highways (DPWH-7) yesterday to discuss the progress of work on the project and the temporary closure of lanes.

“But as what we have seen, dunay portions sa site nga vacant. Magamit man unta to sa atong mga motorists. Then when I checked to some workers, ilang trabaho is from 7–5 p.m., dili 24/7,” said Tumulak.

(There are vacant portions in the site that could have been used by motorists. Then when I checked to some workers, their work schedule is from 7–5 p.m., not 24/7.)

He said he has to discuss this with the DPWH project engineers.

In the past, peak traffic hours would start at around 7 a.m., but now, there is traffic congestion as early as 6 a.m.

(They cannot work 24 hours because they are still waiting for the materials so that when work starts at night, the materials are ready.)

He said work at the construction site is still on boring and piling works of phase 2.

For now, private vehicles and motorists coming from the south are advised to take diversion routes.

They can turn right to Cabreros, left to Rizal Avenue Extension and left to corner Vestil Street to N. Bacalso Avenue flyover between 6 a.m to 10 a.m.
Tumulak said he would like to discuss the work schedule with WT Construction.

“If that’s the case, nga slow movement ang operation, and not 24 hours, how about we open both sides during peak hours, para free-flow ang traffic, then they could continue their activity right after the peak hours,” Tumulak said.

Moreover, the construction work of the underpass will also be temporarily stopped when the novena Masses for the Fiesta Señor would start and would only return full blast right after the Sinulog grand celebration.

Tumulak also pointed out that until now, he has not seen progress on the “concreting” of the alternate routes which the DPWH promised to fix.Miole said they are “asphalting and patching” the damaged roads.

(We already started repair on the Tagunol Road last June. But that road easily gets eroded because it floods there. A road, no matter how strong it is built, if water seeps in, it will really get destroyed.)

Read Next
Church hopes for more participants to Red Wednesday